“He needs to be invited to next month’s meeting,” city attorney, Joe Murray said.

Taylor’s duplex at 535 Jefferson Ave., was dropped from the city’s nuisance list, but the building at 328 Lincoln Ave., remains, and was formally declared a nuisance by the council.

City council members believe Taylor moved junk pieces of furniture, barrels and stacks of pallets next door to the back of the Variety Store.

“If it doesn’t get cleaned up, we’re going to clean it up,” Mayor Doug Huber said.

Taylor also owns an old trailer, which should be moved, the council said.

“Or put a fence up,” Sudbeck said.

In its effort to make Hebron look more presentable, the council left several properties on its list, and will formulate a new ordinance for Riverside Park, where a recent incident prompted the discussion.

A tent housing a family with children was at the park for approximately three weeks. The city has a 10-day limit for camping and had already accepted payment, part of which was paid for by Blue Valley Community Action.

Instead of 10 days, the city will limit stays to five days. Extensions may be applied for.

Items on sidewalks were also discussed. Two individuals had complained to Sudbeck.

The council understands businesses that bring retail items out during business hours, but doesn’t know how to differentiate between items, such as couches and benches, and retail goods.

Council member Rita Luongo suggested a free permit for merchants who have seasonal items to display.

“I’m concerned because one business had tasteful items out front and now it looks like garage sale items,” Sudbeck said.

In other business, Stephanie Boldt and Mark Varner visited with the council about the recent Oregon Trail Run.

“We’re looking at how to grow the event. It needs more community involvement, and from the city and chamber. It has potential to draw a lot of people,” Boldt said.

“A number of people come here every year from out of state because they like the area and like to run River Road,” Varner said.

“People were very appreciative of what you did,” he said. “They couldn’t say enough about the trail.”

Wiedel, who also mentioned the elementary school pays for the Fun Run medals, encouraged Boldt and Varner to return with their needs for the run.

Because of a vote the council took Monday, a public hearing has been scheduled for Nov. 25 at 12 p.m., at the city office for hearing support, opposition, criticism, suggestions or observations for the Hebron Northeast Blight and Substandard Determination Study by JEO Consultants, Inc. A legal notice is running in this week’s issue on page 6B. 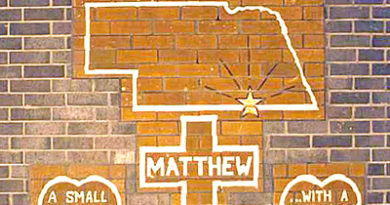 Thayer Central to offer ‘breakfast on the go’