The Thayer County Road Department held a public hearing Feb. 10 on its One and Six Year Plan for the county’s roads and bridges.

The county will also receive assistance from the County Bridge Match Program to provide 55 percent of funding for the replacement of three structurally deficient bridges.

To qualify for funding, the county submitted a proposal to the state for consideration and received points. The proposal was for $354,409. The state’s share will be $194,925.

Road superintendent Roger Hofts said the county’s share of the cost may be covered by the Federal Funds Purchase Program, which is a stark contrast from the old federal aid program.

“With the old federal aid program, you didn’t have a lot of say on how the bridge was built,” Hofts said.

Roads and bridges on the list for the One Year Plan are (culvert repair applies to several locations):

Roads and bridges on the list for the Six Year Plan are:

Hofts also pointed out the county is unique in several areas, such as building its own deck slabs for bridges and pumping gravel from its own pit.

Traditionally, the gravel pit has saved the county $500,000 per year for its 800 miles of gravel roads. Hofts compared the county’s system to Fillmore and Saline, which pays over a million to secure gravel.

But the pit is currently pumping below the target level. County employees are investing more hours to pump less gravel.

Too much fine sand is coming up instead of gravel, Hofts said.

“We’ve probably got five different locations and options we’ve looked at,” Hofts said. “Nothing is decided, but we are getting closer.”

The county purchased the pit in 1998.

Thayer County Commissioner David Bruning added the county has received the final payment from the Nebraska Emergency Management Agency regarding the flooding in 2015.

“We’ve received everything and more than we expected, so it was well worth the pursuit,” Bruning said. 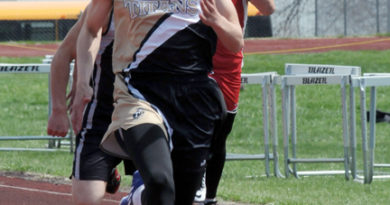