The Bruning-Davenport/Shickley Eagles did their best to avenge a 3-1 losing streak against Exeter-Milligan, but just couldn’t withstand the Timberwolf pressure in the D1 semifinal round of the 2011 NSAA State Volleyball tournament.

“Our inability to get into our offense off their attacks kept us from keeping the momentum we gained in games two and three,” said BDS coach Dan Sorge. “It was a hard fought match.”

The Timberwolves went on to finish as runners-up after falling to the state winning Humphrey Bulldogs. BDS ended fourth after falling to Guardian Angels Central Catholic in a grueling five-set consolation contest. GACC won the bout 25-14, 25-21, 18-25, 15-25, 17-15.

“We came up a little short in the consolation game,” said Coach Sorge. “We battled back for a 2-0 deficit to lead 12-8 in game five only to finish short. I am extremely proud of the girls and how they never gave up all season.”
Exeter-Milligan

Against the Timberwolves, Shelby Garland led the with 18 kills while Makaleigh Yantzie had 13. Garland also provided one ace serve and one block.

Matyson Kleinschmidt pounded out seven kills for the team while Taylor Houck had six kills and three blocks in the game.
Whitney Walters put up 23 assists while Ashley Hinrichs provided 14.

Against Guardian Angels Central Catholic, Yantzie pounded out 15 kills while Garland had 13. Yantzie also used three service aces in the attack while Garland had one. Both Garland and Christie Swartzendruber had two blocks each in the game.

Taylor Houck had an all-around good game with ten kills, four ace serves and one block.

Walter’s provided 23 assists in the contest.

The BDS Eagles allowed themselves one loss before sweeping the next three matches against the Sutherland Sailors Thursday night in the first round of the D1 state volleyball tournament. The 3-1 win pits the second-ranked Eagles against old foe Exeter-Milligan Friday afternoon in the semifinals.

This will be their fifth meeting this year; the top seeded Timberwolves lead those battles 3-1. The Eagles (27-4) are responsible for handing Exeter-Milligan (31-1) its only loss on the year.

Against Sutherland in the quarterfinal, BDS went 23-25, 27-25, 25-20, 25-22 to take the victory. Attempting to contain Sailor middle Samantha Kennedy took a little while, but the Eagles managed to get their serve-game in check and go on the attack in the final three sets.

“Our aggressive serving kept the Sailors from getting the ball to their big middle hitter on a consistent basis,” said Eagles coach Dan Sorge. “After a few game one jitters, we settled down and played up to our ability.”

Eagle senior Shelby Garland matched Kennedy hit for hit until pulling ahead in the fourth set with a stellar 26 kills on the night. Kennedy had 22. But defense behind Taylor Houck aided in control of the final set; Houck had three of four total game blocks including a block and kill to close out the game-winning match.

Houck also had seven kills and one ace serve in the game. Whitney Walters provided three ace serves and 14 assists on the night while Christy Swartzendruber, who led in the back with 25 digs, had two ace serves. Cynthia Mick had two kills and two blocks while Makaleigh Yantzie pounded out 15 kills and had one block and 19 digs. Ashley Hinrichs rounded out the team stats with an outstanding 37 assists. 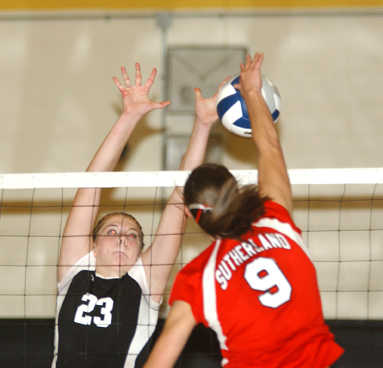 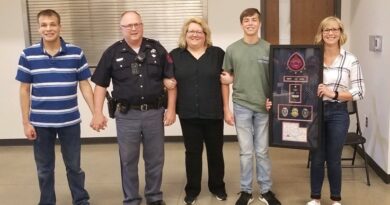