LINCOLN, Neb. — Recent rains and even snow storms in the western part of the state are helping to recharge soil moisture, the University of Nebraska-Lincoln state climatologist says.

“At most of our long-term stations, the wettest October on record is between 6 and 7 inches of precipitation,” Dutcher said. With 20 plus days of October remaining and another two to three precipitation events, this October could be one of the top 10 wettest on record even with moderate events.

Another system is already setting up for the end of this week, he said, and it appears weather patterns could remain active.

While this does slow harvest across the state, most fields should dry out in a few days since much of the moisture is getting into the ground as conditions have been dry. In addition, this is beneficial for the state’s newly planted winter wheat crop.

“Compared to last year, we are ahead of schedule,” he said. “This gets our surfaces wetted up, and we are off to a decent start for the soil moisture profile. However, on the flip side, there still are drought concerns to deal with. West central and southwest Nebraska missed out on this precipitation.”

Also, while there will be improvements in the drought, they will not be as dramatic as one might think.

The heaviest precipitation fell in the Blue River basin, which is having minor low-land flooding. This is important as there have been water restrictions in that area.

“While this event may not a significant impact on the water tables, it does have the potential to aid things. These precipitation events will be most important for improving stock ponds. The next step will be groundwater tables, which have seen dramatic declines during the drought,” Dutcher said.

He said while this fall seems to be active, many people might think this a prelude to an early winter.

“What I can tell you is we have started out some winters with a big snow storm and have nothing again; other times we have started out strong and remain strong,” Dutcher said. “It really is hard to determine. But if we continue to have systems move through at a regular frequency, things do seem to be setting up to be more active.”

For more information about weather and crops, visit CropWatch, UNL Extension’s crop production newsletter, at cropwatch.unl.edu or listen to Ag Almanac at http://agalmanac.unl.edu/.

Mammograms may not catch everything 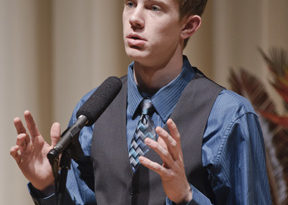 Russell Heitmann of Hebron is 2013 Nebraska Poetry Out Loud Champion