The Thayer Central Titans rounded out the wrestling season with a state showing that had two of five grapplers securing medals for the team. “I was happy with how we ended the season,” said Thayer Central coach Brett Larson. “It was a great way to send our two seniors, Clayton Hintz and Dalton Kenning, out – I know they didn’t reach their goals, but I think they learned a lot about who they are and that will help them in the future.”
Ending the three-day Class D state tournament with 34 points, the Titans were led by junior Cody Krula who finished third in the 152 weight class and senior Dalton Kenning who finished sixth in the 145 weight class. Other wrestlers included Jayden Dightman, Jamie Lange and Clayton Hintz.

Cody Krula, who ends his junior season 36-9, started his state contention on a couple of pins over Eric Rasmussen of Amherst and Shane Beckman of Elgin-Public/Pope John. He pinned Rasmussen in 3:33 and Beckman in 2:28 to advance to the semi-final championship round against Patrick Dempsey of Friend. But Dempsey was able to win the bout 7-5 forcing Krula to the consolation side of the bracket. Entering in the semi-final round there, Krula defeated Makay Beck of Garden County, 4-2, to advance to the final bout for third place where he defeated Felipe Pinales of Archbishop Bergan, 5-0. Krula placed fourth in last year’s tourney.

Senior Dalton Kenning ends his high school career on a 37-13 senior season record after finishing sixth at the state tournament. His contention started by defeating Drew Riggs of Maxwell, 6-1, but falling to Nick Arit of Oakland-Craig, 5-6. The loss sent him into the consolation contests where he pinned Anthony Shimmin of Arapahoe in 1:35, and defeated Ryan Batenhorst of Archbishop Bergen, 9-2.

The victories advanced Kenning into the consolation semi-final bouts where he fell to eventual third place winner Mason Klingelhoefer of Amherst, 0-7, pitting him against Garrett Sonderup of Fullerton his final match of the day. Sonderup defeated Kenning 4-2 and the senior returned home with a sixth place medal.

Also wrestling for Thayer Central, incoming freshman Jayden Dightman went 0-2 on the state mats in his debut performance. The lightweight wrestler (113 class) was pinned by Levi Baughman of Hitchcock County in 4:50 and fell to Josh Davis of Pender, 1-10. He ends his starter season 11-19.

Junior Jamie Lange, wrestling at 132, finished his season 34-19 after going 1-2 at the state contest. In his first round he was pinned by Corby Forbes of Plainview in 5:31 which put him in the consolation bracket. There he pinned Jon Dobish of Axtell in 2:11 advancing to face Colton Lammers of Pleasanton. Lammers defeated Lange 11-5 to end Lange’s contention.

Senior Clayton Hintz, wrestling at 138, managed to go 1-2 at the state meet ending his high school career on a 29-11 senior season record. The returning state contender started his day by pinning Garret Zwiebel of Morris in 1:17. But Jacob Sebade of Pender forced Hintz into the consolation rounds after downing the senior 7-2.

Hintz then fell to KC Defillips of Overton in a grueling 7-2 overtime match rounding out his state performance.

Thayer Central looks to lose both Kenning and Hintz to graduation this year. “Having Dalton and Clayton as seniors this year will leave a void on the team next year,” the coach said, “but I feel that we have kids that are capable of stepping into their roles. The state meet experience will help Cody, Jamie and Jayden step up as leaders next season. I was impressed by the hard work all the wrestlers put in this year. It was fun to watch them get better every week. If the team lifts and does things this off season, the sky is the limit next year.”

For more photos of all the state wrestlers, click on the photos link at the top of the page. 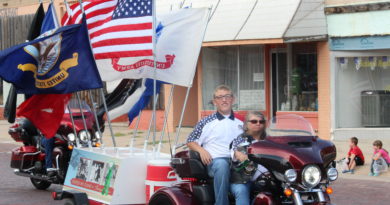