Thayer County Assessor Karla Joe told county leaders Wednesday the county has seen a $5 million growth in the last year. “The growth is in new construction,” she said, “which I think is really good for us during these economic times.” Joe spent a few minutes updating Dave Bruning and Dean Krueger during the Feb. 24 commissioners meeting. Chris Frye was absent.

Joe also presented preliminary information indicating a raise in agricultural land valuations, a fact she says most landowners are already aware of. “These figures are estimates right now,” she said after the meeting, noting nothing would be “chiseled-in-stone” until next month. “I just wanted the commissioners to know ahead of time what they’re facing.”

The assessor’s office collects data from aerial views and by physically reviewing the county, Joe said. “If we know a building has gone up or see something new from the aerials we go to the new construction site to get measurements, see what type of building it is and find out what it is used for.”

She said workers spend most fair-weather months making their way around the county. “People have been very nice and very cooperative with us,” she said.

In other business, the Ag Society met with and updated the commissioners on the 2011 County Fair slated for Thursday through Saturday, Aug. 4-5-6. Wednesday,  Aug. 3, will be entry day and Sunday, Aug. 7, is tear down and cleanup.

“We’re going to have the trailer pull race again,” said Society president Dean Meyer. “It was a huge hit last year; I don’t think we’ve seen the grandstands that full since horse racing back in the old days.”

Meyer said all the grandstand shows would be free again this year  which the Society feels accounts for the large crowd. “We charge for the shows and we get the same 300 people, but when we open it up we fill the place.”

Society member Randy Weideman said they did so well with the “free show” concept they had other fair board members from other counties asking them at the annual meeting how they did it. “Not very many county fairs offer free grandstand shows,” he said, “but we found everyone benefitted from the idea. Food vendors, the carnival, the beer garden all had better nights.”

Wiedeman added that families returned to the fair more often since they could see all three shows instead of just one, and that helped everyone out. “It took a little work to make the shows free, but it’s really worked well for us,” he said.

This year the Society will offer the races, a vocalist, and a hypnotist/comedian over the three nights of grandstand shows. “The log carvers are also coming back and we’ve talked to Josh Mosier of Deshler about demonstrating knife making,” Meyer said.

The Society meets the first Thursday of every month and board members include Meyer and Weideman as well as Bill Easton, Curtis Elting and Eric Nutsch.
Meyer said anyone is invited to attend the meetings. 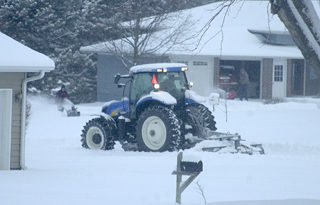