In a state where cattle is the top commodity and outnumbers actual people nearly four to one, Producer Gina Hudson wonders why more Nebraska students aren’t eating homegrown beef in their school lunches.
After hearing Thayer Central’s Nebraska beef to school lunch plan, Hudson started researching the concept for Bruning-Davenport and asked Mark Jagels, another producer to help her.
Bruning-Davenport School was receptive to the idea of giving students a better protein product, Hudson said.
The school board gave its stamp of approval in October, Superintendent Trudy Clark said.
“It will be used as an educational piece as well,” Clark said.
“We’re really wanting to hit the agricultural education part of it,” Hudson said.
Clark said Bruning’s FFA program is strong and Agricultural Teacher Siera Meyer is more than willing to work with the club’s mission.
Not only will students eat Nebraska beef, they’ll learn about how that beef made it to their plates and its nutritional value.
Hudson said there are great advantages to the program.
Jagels said they are educating the next generation on the importance of a healthy diet.
They organized the Bruning-Davenport Beef Boosters Club to start raising funds for a three-year plan to implement Nebraska beef in the school’s lunches.
Hudson said they estimated the program would need $25,000 to sustain itself for three years.
She said they have raised half through donations made to the Beef Boosters Club through the Bruning and Davenport community foundations.
The club will use McClean Beef, a United States Department of Agriculture certified processor, to purchase and process the beef.
Hudson said the McCleans are excited to be included. Her goal is for the McCleans to have an entire pen of cattle earmarked for the school’s lunches.
Bruning-Davenport Principal Erik Sokol is excited as well.
“We’re flexible as far as the educational component of it. I know a lot of people have put in the effort to make this possible to do something great for our kids,” he said.
Jagels said the ongoing goal is for parents, patrons of the school district and businesses to continue to see the importance of serving Nebraska beef and become a part of the process.
Along with educating students about beef, they will also learn crop production, Jagels said.
The educational portion of the program will give children an understanding of the different practices out there, he said.
“It’s about respecting each other’s practices, whether it’s conventional or organic,” Jagels said.
“It’s nice for the kids to hear what beef can do for them,” Hudson said. 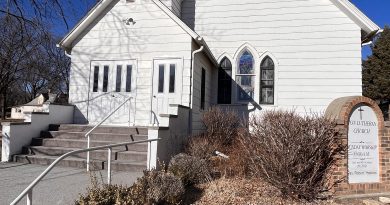 Zion Lutheran in Hubbell to close