The Noteables Jazz Ensemble of the United States Air Force Heartland of America Band will soon be holding a musicianship workshop for Thayer Central High School students later this month. Following the workshop, the ensemble will present an evening concert for the public.

Delighting audiences since 1943, the Heartland of America Band represents more than 325,000 dedicated Air Force professionals who diligently watch over the skies of our country and our national interests, and who stand shoulder-to-shoulder with our allies protecting and defending all those who cherish freedom.

This 45-member unit is an Air Force squadron of professional musicians whose backgrounds include advanced degrees in music performance and whose broad mastery of musical styles range from classic to contemporary, jazz to country, and pop to rock.

Various component ensembles of the band perform more than 450 concerts annually, each touring extensively throughout eight-state areas of responsibility. One of those components is coming to Hebron.

The Noteables Jazz Ensemble will arrive at Thayer Central High School on Thursday, Jan. 27, to work with band students during the afternoon. Later that evening, the ensemble will perform for the public at 7:30 p.m., in the High School gymnasium.
The program, which runs approximately 90 minutes will feature classic and modern “big band” selections, a tribute to military veterans, and a host of patriotic numbers. 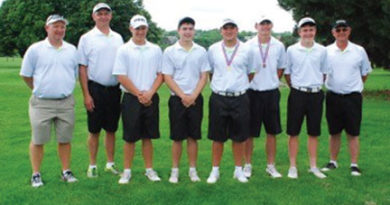