Nebraska State Patrol Trooper Steven Kerns of Hebron and a 27-year veteran of the agency, was injured in a two-vehicle accident Thursday on U.S. Highway 81, just north of the Fairmont Overpass in the northern edge of the county.

According to Fillmore County Sheriff’s Office (FCSO) deputy Robert Hester, who investigated the accident on September 13 with Fillmore County Sheriff Bill Burgess, Trooper Kerns was traveling southbound on Highway 81 in his cruiser when he attempted to overtake a northbound speeding vehicle. During the changing of lanes, Kerns lost control of his vehicle and struck a southbound truck pulling a homemade pick-up bed trailer being driven by Kelly Thomsen of Geneva.

Kern’s cruiser ended up well into the ditch west of the highway near a farmstead, while Thomsen’s truck remained in the southbound lane. The trailer ended up in the median. Both drivers were transported to medical facilities by rescue units from Fairmont and Geneva. Thomsen, who was on her way to Geneva from York, was treated and released at the Fillmore County Hospital in Geneva. Kerns was in stable condition at BryanLGH West in Lincoln after the crash. The 51-year old trooper suffered a shoulder injury. He is assigned to Headquarters Troop-Lincoln and is stationed in Geneva.

Hester said parts of the southbound lane of Highway 81 were closed for up to an hour and a half while the accident was investigated and cleaned up. Fire Departments from Geneva and Fairmont responded to the accident, which was called into the FCSO at 2:59 p.m. 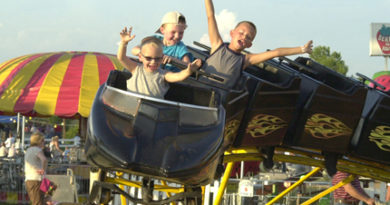