Bruning Grocery has carved itself a paragraph in the permanent Congressional Record.
The family-owned business was one of eight to receive the “Excellence in Economic Development award from Congressman Adrian Smith, who solicited nominations in May and ended up with more than 50 businesses from 30 communities in the Third District.
“I join your family, friends and neighbors in acknowledging your accomplishments and applauding your efforts, and hope they will inspire increased economic development, which will strengthen communities across the Third District,” Smith stated in a letter to the grocery last month.
Paul Philippi, who is third generation to lead the store, said Smith stopped in last year.
“We talked about the struggles in a small town, like the difficulties in customer flow,” Philippi said.
A customer nominated the grocery.
“We had no clue we had won,” Philippi said about that Monday morning they all came to work, only to be congratulated and learn their accolade was shared the day before on Facebook.
The store was hailed on Smith’s site for “exceptional service,” ability to draw shoppers from surrounding communities, for its competitive prices and the “vibrancy” Bruning Grocery adds to the town’s main street.
In telling the story, Philippi said the store builds on the services it provides and strives to improve.
Always.
“We have a strong meat department – you want a steak, we’ll cut it for you. Our hamburger is ground fresh multiple times a day,” he said. “We just try and keep that as our niche because we do it really well.”
At the same time, Philippi said they have to work within areas of the store to stay current.
“We are trying to better in our freezers and match what the people want,” he said.
His grandfather Rex Philippi bought the store in 1973 and in 1984, Philippi’s father, Kurt, continued the evolving legacy.
“It seems like with each generation, new ideas crop up. When dad came in, there wasn’t much for pop and chips, so he brought that in,” Philippi said.
He said he joined the business right out of college in 2008, but Philippi has been in retail grocery as far back as he can remember.
“The grocery business is fun. We’ve got really good workers,” he said. We know everybody and we work really hard. It’s comfortable. You don’t regret coming to work.”
The store’s employees stand out in Philippi’s view.
“Our employees are awesome. We have long standing employees, some for 15 or 20 years. These girls go above and beyond, more than I ask them,” he said.
It gives Philippi pride, but it’s not his doing, he added.
“It’s theirs,” he said.
Consistent expansion is another survival tactic of the rural grocery store.
Big changes in the 1990s saw Bruning Grocery with new areas for its specialty in meat, and storage loading and unloading. The Philippis also added a couple aisles.
“We needed the capacity. Every year, we have a little bit of growth,” Philippi said.
It’s not easy thriving amidst Dollar stores and Walmarts, but Philippi takes a unique stance.
He said he’ll never match the pricing or hours of the corporate giants, but if he can’t draw customers into the rural experience, then he needs to offer something different.
“So far, we’ve been able to balance it and we hope to continue that,” he said.
He encourages shoppers who haven’t visited the store to “check it out.”
“Be proactive and come in, try it out and ask questions,” Philippi s 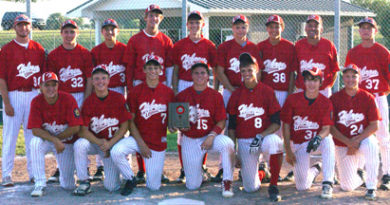