The Carleton Village Board began its Jan. 9 meeting by voting to keep the Carleton community building for the community.
The board had been approached to use the building as a child care facility for Bruning-Davenport because of its ideal location.
“We knew you had concerns about utilizing the building,” Bruning-Davenport Superintendent Trudy Clark said.
Clark was speaking on behalf of the Bruning-Davenport Board of Education, which has taken over the project of designating a location for child care after Heather Ramsey did the research.
There are about 100 children in the district under the age of five. Child care is also needed for half days of school, Ramsey said.
She would like to see a facility similar to Red Cloud’s, which is fairly new.
Red Cloud hosts child care and early childhood education, accommodates Title 20 service for low income families and is operated by the Red Cloud Community Foundation.
But in Carleton, the community building is already collecting rentals for the year. The American Legion and Auxiliary will hold the county-wide meeting there and the Fireman’s Appreciation Supper is coming. The Legion and Auxiliary will also celebrate the organization’s 98th birthday. The official birthday date is March 15.
Village board clerk Chris Smith said those activities are slated to take place in the next couple months, not to mention funeral gatherings and the Businessmen’s Club that also use the building.
“We needed a place in town. We didn’t have a gathering place,” Smith said.
The building sits on the former elementary and high school ground. It was used as an elementary until the Carleton district dissolved and students spread out between Hebron, Deshler, Bruning and Shickley.
“Five buses used to come into town every day,” Smith said.
The building is also used for Milo Days.
“If we took that away, we would have nothing in town for people,” Smith said about the building.
The board suggested portable classrooms, but Clark said they aren’t feasible and the school board is trying to use existing buildings, such as the Parish Hall, however, the board has nothing to do with the church.
Another suggestion was the former Davenport medical clinic, but that building will be used as a fitness center, which is the third phase of a project managed by the Davenport Community Foundation.
The new Davenport medical clinic recently opened.
The school board would like to find a location before the 2018-2019 school year. Cost is a factor because many of the existing buildings need state regulation upgrades to host children.
“The daycare needs to be separate from the school,” Clark said. “We have a few qualified people willing to work and run it. The first choice is always going to be something that is already standing.”
Meanwhile, the village board is looking at signs for the new playground.
“We are thinking signs to the north and south so people slow down and watch for kids,” Smith said.

Back to square one? Not exactly 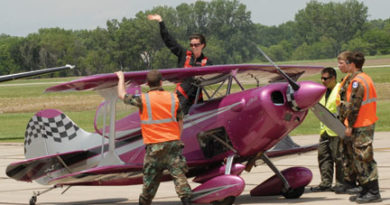