The Hebron City Council has appointed Chris Fangmeier as the city’s new administrator, a position created within the past couple months.
Fangmeier, who has served as the city’s utility superintendent since 2011, said discussion began in September.
A job description for Fangmeier was approved by the council at its Nov. 2 meeting. Quenton Pulliam of the city’s street department will be the city’s new utility superintendent.
Fangmeier has a number of goals in mind for his new position. In addition to revamping the city’s website and restructuring personnel duties within the utility department, he is keeping the revitalization of the downtown area on his radar.
The council is shooting for Fangmeier’s talents to spur economic development as well.
It’s too early to tell where that development might occur, Fangmeier said.
“The council definitely wanted that in the job description,” Fangmeier said.
The $72,800 position calls for Fangmeier to attend all city council meetings and give reports; investigate all areas of the city and recommend ordinances for “good city government;” oversee all functions of the city on all levels; inform the mayor and council of the city’s financial condition and needs; investigate any complaints filed against employees, departments, divisions or services of the city; act as Hebron’s liaison to state and federal economic development agencies; work on grant funding; and promote new businesses and industrial development.
As the discussion began to take on a city administrator, the council researched other towns in south central Nebraska of Hebron’s size.
“They found a lot of municipalities our size are going to a city adminstrator position,” Fangmeier said.
Fangmeier is from Hebron and a graduate of Hebron High School. He furthered his education at Northeast Community College in Norfolk and earned an associate’s degree in utility line.
The City of Beatrice hired Fangmeier immediately after he finished his degree. He has worked in city government since 2002.
Fangmeier said he will be available on a regular basis for public concerns and questions.

Sprints to be featured at fair

Reinke: “A good book is a good companion” 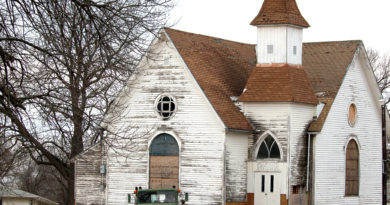