The ordinances would give the city a foundation to build upon instead of a long process that could go into litigation, such as the situation with the two properties on 4th Street next to The Bottle Shop.

“The intention isn’t go after vacant buildings and tear them down,” Mayor Doug Huber said. “It gives us a chance to talk to the people who own the buildings and the city council would make a decision. The ordinance gives the city an avenue.”

Huber noted the ordinance is similar to one used in Belleville, Kan.

A vacant building in the ordinance is described as unattended or unoccupied, not actively used as a place of business and frequently open or unsecured.

“A commercial building or property will be considered vacant when found to be in the above condition for more than six months and subject to the registration requirements,” the ordinance reads.

Owners would be required to register the building with the city within 20 days of the city giving written notice. Registering the building requires filling out a form that includes a period of time the vacant building is expected to remain vacant and a plan and timetable for returning the building to “appropriate occupancy or use” and “marketing the property.”

Upon registration, owner would pay $100 per year, and make the property available for an initial inspection within seven days of the registration application and again within 14 days for ongoing inspections.

Not registering a building could cost owners $500, and if the building is vacant and unregistered for more than one year, deemed “chronic vacancy,” a fine of $5,000 per year with a 10 percent increase each year will be imposed, according to the ordinance.

The second ordinance for dangerous and unfit structures would require owners to make the properties available to the city for inspections:

“If entry is denied, the enforcing officer may, after receiving authorization from the city council, seek an order for this purpose from a court of competent jurisdiction.”

The ordinance states petitions by at least five residents declaring structures dangerous or unfit for human habitation or occupation will prompt an investigation by the “enforcing officer,” who would require repairs, improvements, structures to be vacated or demolitions.

The council proposed the requirement of reading the ordinances three separate times be waived, but Pat Kenner objected, and said the three readings should be the council’s sound board.

“You’re giving up the opportunity to let the public speak,” Kenner said.

The motion to waive was rescinded as Huber prepared to read the ordinances, however, he read only the first paragraph of each ordinance. Copies of the ordinances are available at the city office.

In other business, the city addressed declared nuisances, specifically 1223 and 1225 Lincoln Ave., and 718 Union Ave.

“At this point, we can clean it up,” Huber said about the Lincoln Avenue nuisances.

County property information now available at the click of a mouse 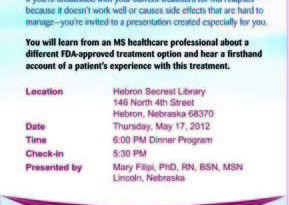 Take Control of your MS Relapse – Know Your Treatment Options