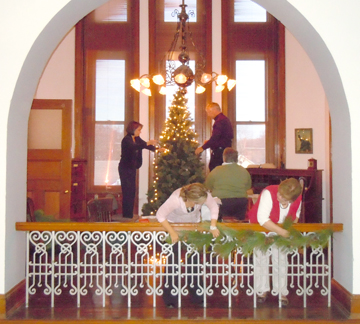 While Thayer County Commissioners Dave Bruning, Chris Frye and Dean Krueger were concentrating on how to make the outside of the county courthouse politically-correct-in-decoration for the Christmas season, workers inside the building were wondering what they could do to make everyone feel welcome. The accusation last year that the government of Thayer County was sending a singular Christian message to its public during the Christmas season by displaying only the WAC nativity had all the employees wondering how to change the depiction.

Over the years, while the nativity glowed in its traditional glory outside on the front lawn, inside the courthouse halls, lobby, entrance and offices, workers decorated with a more secular motif using snowmen, trees, garland, automated elves, beads and twinkle lights.
But still, the group thought they might assist the commissioners in making the necessary “message” changes for 2011. What exactly would send the message that the courthouse was there to serve everyone in the county?

At the same time, the courthouse  had been under construction for the last few months receiving a face lift. New glass pane windows replacing old glass blocks gave its marbled halls and dark wood interior offices much needed light and an overall warmth. Christmas decorations could extend that feeling, workers thought, pass it on and share the season’s glad tidings.

Aside from decorating the standard tree in the lobby, said county assessor Karla Joe, workers wanted to add something a little more community inclusive so that all 11 towns in the county would feel the courthouse belonged to them.

“The commissioners graciously purchased two new trees and other decorations,” Joe said and added that the old lobby tree had seen its day. But the big change came when employees got the idea to decorate the trees with historical scenes from around the county. “We sent everyone out to find old photographs from the area; we wanted pictures telling the story of Thayer County.”

The group also turned to the Historical Society to obtain many of the photos which they photo-copied, mounted on card stock, laced with ribbon and hung on the lobby tree. Some photos were also displayed on draped garland inset on ledges, desks, and counter tops throughout the three floors.

A second tree is presented in the courthouse’s balcony on the third floor and can be seen from outside through the window at night behind the carolers directly underneath the clock tower. The carolers were retrieved from  ten years of storage to be displayed as part of the “new” decorating scheme outside.

And while they were at it, the commissioners decided since the old blue standard bulb lights surrounding the outside structure needed to come down to make way for the window replacement project, new LED lights could be purchased to replace them. “We decided to go with blue again,” said commissioner Chris Frye during the courthouse decorating. “We considered white, but the blue lights look better against the sandstone.”

The courthouse will stay decorated throughout the holiday season and anyone is welcome to view the new items. And, if anyone has questions, Joe said, just ask any of the staff. They’ll be sure to fill you in. 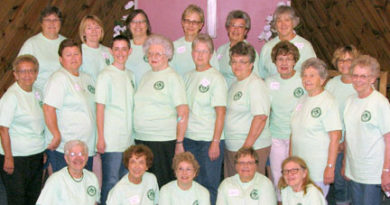