Coyotes can spell trouble for livestock owners, a fact Thayer County commissioners are well aware. They are the main reason to fork over a few thousand dollars each year to Wildlife Management Services, a service that provides animal control to Thayer County.

“We’re seeing an increase in the coyote population,” said the service’s representative and wildlife specialist Spencer Nelson as he gave his annual report in June. “And because of the mild winter, they’re big and they’re very healthy.”

Nelson said the bulk of his calls, hence the bulk of his time spent in Thayer County, is due to coyotes. And although the service answers the call for all types of wildlife issues, coyotes remain the top priority. “The old ones are smart,” he said. “They are the leaders, and we concentrate on removing them because they are the ones that go after livestock.”

Nelson said there were no calf losses this year (from coyotes) because the service was able to get in prior to calving season and remove the adult animals. “We did some extra prep work because of the increase in the population and it paid off,” he said.

The commissioners view calf loss as a determinant of the service’s worth. Nelson’s request for $7,010 (the same as last year) easily passed.

Nelson said he spent 264 hours in the county last year answering calls for raccoons, skunks, badgers, bats and fox squirrels. “We also had one feral dog,” he said. And while skunks are known to carry rabies, he said the service only tests for the disease if suspicion warrants.

The commissioners wondered if amateur trappers might be helping deplete the coyote population. Nelson said, to the contrary, traps tend to teach the older ones. “Most of the animals caught in traps are young,” he said. “You need to remove the older, smarter adults to control the population, but seriously, we don’t impact the body count that much. I come over here at night and look for the dominant animal – those are the ones killing livestock – those are the ones I’m interested in.” Unfortunately, he added, as soon as a dominant animal is moved out, another moves in.

Wildlife Management Services has a presence in Fillmore, Clay, Hamilton, Adams and Kearney counties as well as Thayer County. 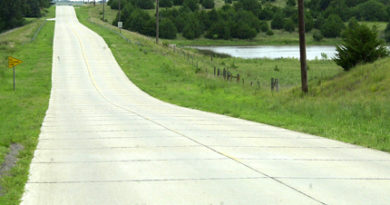