Firefighters across the nation will use Fire Prevention Week, Oct. 9-15, to educate the public in how to stay safe in dangerous conditions resulting from fire, as well as make suggestions on how to prevent fires from happening. In rural areas, such as Thayer County, individuals who do the job without pay keep our emergency programs running.

The blaze, rumored to have started when Mrs. Catherine O’Leary’s cow kicked over a lamp, killed more than 250 people, left 100,000 homeless, destroyed more than 17,400 structures and burned more than 2,000 acres. The fire, which began Oct. 8, 1871, did most of its damage on Oct. 9. Fire Prevention Week is celebrated each year during the week of Oct. 9.

Another blaze is attributed to the start of the educational week; not nearly as popular, but far more destructive, this second blaze occurred the same day. According to the National Fire Protection Association’s web page, the Peshtigo Fire, the most devastating forest fire in American history, roared through Northeast Wisconsin, burning down 16 towns, killing 1,152 people, and scorching 1.2 million acres before it ended.

According to the site, historical accounts of the fire say that the blaze began when several railroad workers clearing land for tracks, unintentionally started a brush fire. Before long, the fast-moving flames were whipping through the area “like a tornado,” some survivors said. It was the small town of Peshtigo, Wisconsin that suffered the worst damage. Within an hour, the entire town had been destroyed.

Wind and fire are a dangerous combination and something the local fire departments are extremely familiar with, especially in the fall. Dry conditions, brisk winds and a simple spark from machinery in the fields can start a quickly moving blaze that becomes quite taxing to stop.

Field fires are so common in the local area, (two broke out as recently as Wednesday afternoon, Sept. 28) that local firefighters are always at the ready to fight them. Most field fires travel quickly as stiff winds fuel the flames. Dried crops also add fuel to the fire, much like kindling and blazes like this take a lot of manpower and a lot of water.

All of the departments generally need help with such fast moving flames and it isn’t uncommon to find several departments working in mutual effort to control a field blaze.

Last year, Chester, Hubbell, Byron and Deshler volunteers answered the call when a bean stubble field outside of Chester threatened to spread into the town. Carried on 30 to 45 m.p.h. winds, the afternoon blaze ate its way across the field toward town in record time.
Residents along Church Street used garden hoses to douse the fire as it neared their backyards and others brought in tractors with disks to churn the stubble into the dirt in order to stop its progress.

Those types of efforts add to the overall fight, however strong winds often carry sparks to trees and wooden structures. Firefighters must not only douse the flames that are burning, but look ahead to what those flames could possibly spread to.

In the case of the Chester fire, the blaze was thought to have started when strong winds helped spark a week-old burn pile near the area.

With the fall season and harvest just getting started, local volunteers have already answered at least three field fires in the area. Next week, as fire prevention week takes place, help our local heroes out by making sure any and all burn piles are completely doused and watch where you throw that lit match or cigarette butt. The consequences may not be worth it. 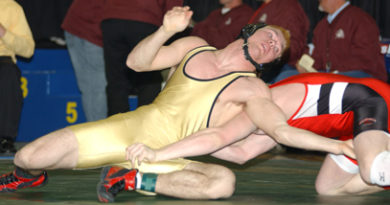 Foundation: Community in mind for grants