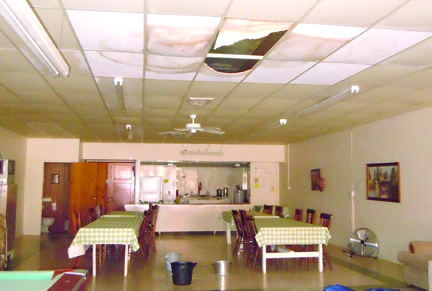 City leaders are still wondering what to do about the Pioneer Center that sits smack dab in the middle of a block of buildings in downtown Hebron, but Monday night, during the regular council meeting, they turned down the idea of putting it up for sale. In a 4-2 vote, the council denied selling the place in lieu of possibly fixing it up.

The Pioneer Club who ran the Center became defunct in 2010 when the last member passed away. Since then the City has taken over the Center because it houses public restrooms. Howard and Sam Mills volunteer to manage the building keeping the restrooms clean and maintaining the kitchen and main living area for potential rentals. The City pays them a small fee to take care of custodial duties.
But a leaking roof has caused damage to the building and city officials have spent the last several months investigating whether it would be worth repairing. In Monday’s meeting, the council weighed estimated costs of tearing it down or fixing it up.

“It’s going to cost at least $70,000 to tear it down,” said councilman Kurk Wiedel, “and that’s just an estimate. We don’t even know if it can be torn down especially since it shares common walls with buildings on both sides.”

Because the structures share walls, the city must conduct an engineering study prior to actually razing the building.

Local contractor Chuck Fink, who was attending the meeting for a separate issue, said he thought the building could be repaired and made into a usable community center for far less than $70,000. “For $15,000, you can put on a rubber membrane roof to stop the leakage,” he said. “Another $2,500 for a suspended ceiling, $7,000 to $8,000 for a new furnace and electrical…I’m just saying, for $70,000 you can tear it down and have nothing, or for less you can fix it and have a community center.”

Fink said structurally the Center isn’t in that bad of shape and the evident damage is fixable adding that the City lost out on potential renters this last year due to the shape it is in now. “There was a family group who wanted to rent it for three days,” he said, “but ended up in Belvidere. For three days that family group would have used the Center and other businesses in this town. But since they weren’t here, their business was lost to Hebron. We need a place for people to hold gatherings. We need a community center.”

The Council toured the building earlier this spring. Councilwoman Beth Goldhammer said the floor might be damaged from the water leakage, and the bathrooms would have to be revamped, “but even if it cost us the full $70,000 to fix it, we’d have something in the end,” she said.

Following the vote, the council decided to collect repair estimates and go over the figures at the Nov. 7 meeting.