A Hebron native is now commanding a U.S. Army unit at the Rock Island Arsenal in Illinois.

“The First Army Support Command is getting another great leader,” Benenati said. “Capt. Esper will use her talent and expertise to take the unit to new heights. She has an exceptional background as a soldier and leader. I’ve got all the confidence in the world that she will continue the great work of this unit.”

Esper thanked the First Army leadership for giving her the responsibility of commanding the detachment.

“I am excited,” she said. “I look forward to serving with you and leading these fine soldiers of the First Army Reserve Support Command. The first sergeant and I are a team, and we will work hard to ensure we have high standards and support all Army programs.”

As commander, Esper will oversee a unit with 78 soldiers, whose mission is to provide trained and ready soldiers to First Army to enable training readiness support.

Esper enlisted in the Army in 1996 and became an officer through a direct commission ten years later. 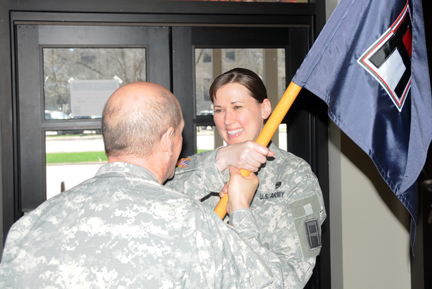