The history of women’s clubs is long in Thayer County and just three or four still exist from the villages and cities that were positively affected by the clubs.
Women’s clubs pioneered legislation in their respective communities to help women and children. On a larger scope, the clubs started 70 to 75 percent of libraries across the United States.
“This is why we still help our towns,” Brenda Rippe said.
Rippe is past president for the Hubbell Woman’s Club, a club in its 90th year.
The club is holding its 20th China Luncheon March 19 at The Acreage in Hubbell, beginning at 11:30 a.m., with the meal of grilled chicken breast on rice, vegetable medley and strawberry dessert at 12:30 p.m.
The luncheon is a fundraiser and typically draws 100 people or more because it is open to the public.
During the event a history of the club will be shown.
“The club did a lot of things for the school when Hubbell had a school,” Rippe said. “One of the big things our club used to do was we always hosted the Chester-Hubbell picnic in the Hubbel Park.”
And for the last 25 to 30 years, the club has made sure veterans eat well on Veterans Day in the Chester, Byron and Hubbell areas.
Rippe said the club, which is led by Marcia Welch, supports 4-H and purchases food for the Blue Valley Community Action pantry.
She said new members are always welcome.
The theme for this year’s luncheon is “Reflections.”
Jamie Luttrell and Joy Acuna are scheduled to perform songs through the decades and during the meal, piano music will be played by Brooklyn Hergott, who is a junior at Thayer Central High School.
At this year’s luncheon, the woman’s club will raise funds for Aiden Mostek, a Hebron boy who is undergoing chemotherapy treatments.
The club is working on a coin march for Mostek. 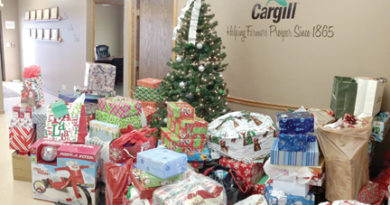 Community chips in to help provide toys for Christmas