MetalQuest Unlimited was the host of a Manufacturing Day for Resellers event last week as the company shared the benefits of solutions for machining; factory optimization; collaborative operations; and robotics.

Approximately 30 to 40 people representing different companies from across the nation were expected to attend the event that included a tour of MetalQuest.

“To compete globally, everything we do is a global competition,” Michael Buchli of Dassault Systèmes said. “For here, we will be showcasing some of our technology for robotics. It’s sort of like a video game. You have the virtual world to operate and the reality is translated to making everything more efficient.”

MetalQuest foresaw the virtual world would intertwine with manufacturing in the late 1990’s.

“MetalQuest is always leading-edge efficient. Our partnership with them is they’re providing feedback and solutions for us,” Buchli, who is originally from Thayer County and has family still farming here, said. “MetalQuest is one of the most advanced manufacturers in the US.”

Buchli added innovation and Nebraska’s work ethic is obviously one of the keys to MetalQuest’s success.

“It’s great for our customers to see how automated a manufacturer can be,” he said about the state’s low unemployment rate of 2.1 percent.

Dassault Systèmes works toward a positive impact in a variety of areas, like energy and resources, education and research, city governments, healthcare using the sciences, like mathematics, biology, chemistry, physics and geology.

According to its website, Dassault has helped thousands of manufacturers reinvent their development and production methods for sustainable innovation.

“When I started 20 years ago, the things we’re doing today was amazing sci-fi stuff, and now it’s here,” Buchli said. “There’s a scramble of how do we stay competitive, make tomorrow better than today and how do we stay relevant.”

It’s hard for some manufacturers to think about the future because the present keeps them busy.

Buchli said the risk today for manufacturers is not adopting new methods because it could put companies out of business.

“That’s a real risk because we now compete globally,” he said.

MetalQuest CEO Scott Harms said to him, it was obvious manufacturing was going to advance to automation from an efficiency standpoint and available labor.

“The tour was eye-opening. People who are very traveled and experienced hadn’t seen a company quite like ours. It was very complimentary,” Harms said.

“If you lose manufacturing, you lose a lot of community and that’s a problem,” Buchli said. “Manufacturing drives ag. It’s a true circle eco-system. You can’t have one without the other. Everything we do is touched to technology, whether we want it to or not.”

Another event will be held May 3, which will be open to anyone in manufacturing.

“It’s open to anyone looking to improve their process,” Buchli said. 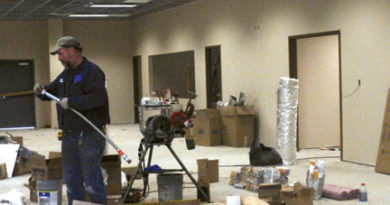