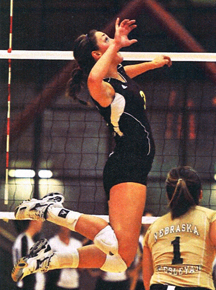 Long is a second-team all-GPAC performer in her first season with the Prairie Wolves. She led the team with 244 kills on the season averaging 2.84 kills per set to rank sixth in the GPAC. She had a season-high 22 kills in a match against Doane, and had 237 digs to rank third on the team in digs.

NWU finished the 2011 season with a 16-12 overall record and an 8-8 mark in the GPAC to finish in a tie for seventh in the league standings.