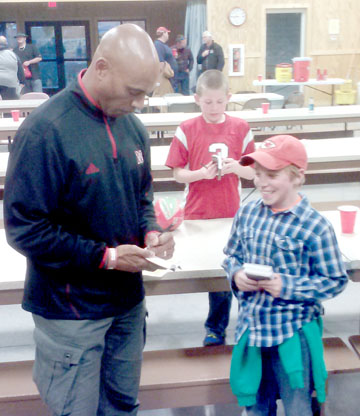 The arm of skeet thrower whizzed.  A shotgun echoed a response, filling the air with what had been a clay pigeon. Powder was poured into the barrel of a muzzle loader and patch and ball were rammed into place. A pull of the trigger, a small explosion, followed quickly by a metallic ting as the ball hit the target. Arrows began to fill up the 15 or so decoys that had been placed on the sand volleyball court. A line was cast, and the smiles followed soon after. An afternoon of adventure had begun.

On Saturday, April 13, over 100 fathers, grandfathers, sons and grandsons gathered at Camp Jefferson in Fairbury for a time of outdoor activities and faith, billed as a Men’s Outdoor Adventure Day.  The father-son event was sponsored by Hebron Bible Church, Hebron United Methodist Church and Zion UCC church of Gladstone.

Organizers of the event had two goals in mind; to provide a fun-filled afternoon for fathers and sons to build relationships with each other and to challenge them to be the husbands and fathers that God calls them to be through the gospel of Jesus Christ.  “Our desire was to give those who attended both a message and model of biblical manhood,” said Pastor Jeff Friesen, one of the event’s organizers.  “This includes loving your wife as Christ loved the church, leading your family with integrity and taking an active role in your community.”

Muzzle loaders, archery equipment, shotguns and fishing poles were all provided by the Nebraska Game and Parks under the supervision of two of the event’s organizers, Brad Seitz and Rick Souerdyke. In addition, Western resident Johnny Barta brought his trapping equipment for a demonstration of trapping techniques and Scott Glasscock, a biologist with the Christian Outdoor Fellowship of America, led a seminar on big game hunting.

After supper, Nebraska Cornhusker assistant football coach Ron Brown challenged those present to become men who “lead courageously” in their homes and in the community according to standards set  in the Bible.  He began by sharing a bit more about seven-year-old Jack Hoffman’s 69-yard touchdown run in Nebraska’s Spring game.

“Like any typical man, he had his own direction he wanted to go, but he was going the wrong way,” Brown said. “The play was supposed to go to the right. Jack started running left, and there were no blockers on the left side. Our defensive players were licking their chops, ‘I know I’m not supposed to tackle this kid, but if you start running the wrong way, I just might.’  The most interesting part of the play was that our quarterback, Taylor Martinez, grabbed the kid and pointed him in the right way, and he took off down the sideline. Like young Jack, all of us start off going the wrong way. Someone had to come along and show us that there is a right way.”

At the end of the evening, Ron Brown answered questions and signed autographs as volunteers began to clean up. The smiling faces and comments from those who attended echoed the thoughts of event organizer Brad Seitz. “Adventure Day was a special occasion for all because it was such a God honoring event,” Seitz said. “Sharing our relationship with Jesus Christ and our passion for what the Lord has blessed us with was awesome.” 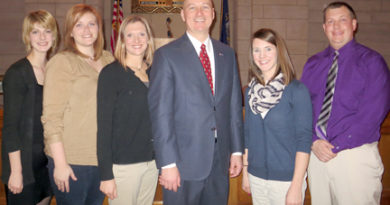