Thayer County’s ticket to multimedia art is the BAO Gallery in Chester in the back of the brick school building owned by artist Cindy Chinn and Art Whitton.

Just beyond the doorstep, BAO Gallery tells stories within, beginning with a photograph on canvas of a larger than life Brownie camera, but the gallery is By Appointment Only, unless you’re lucky enough to catch an informal reception.

On a somewhat windy Sunday Nov. 10, artist Cindy Chinn and photographer Art Whitton held such an opening as their eyes still drooped from the 13-hour flight back from Qatar, where they had spent two weeks under air conditioned domes, newly constructed for Doha, Qatar’s first, international Scrap Metal Exhibition.

Chinn graciously told some of the stories on the gallery walls, which highlight her St. Martin’s and Journeys’ painting series on the same wall as the Brownie.

The Journeys’ prints includes Whitton and herself — Whitton, with his story told by cameras he has acquired since that first cartridge point and shoot, and Chinn sitting high at an easel decked in bling with re-purposed art pieces scattered around her.

“Did you notice the geese were flying weird?” she asked Whitton about his Journey.

“That the V is backward?” Whitton shoots back.

Whitton’s mother is there, too, in her glory of communicating with dogs (she’s a dog behavioral specialist) surrounded by palm trees because of where she lives.

And then there’s the Journey of Chinn’s aunt and uncle with a Volkswagen.

“She hated that van. He said if you sneak the van in, I’ll give you extra,” Chinn chuckled. “He’s leaving me this painting in his will.” One wonders if the bus backfired when started or if it had heat, it’s so realistic. Chinn points out the detail on the bus, the country flags of the places her uncle and aunt traveled, “Soulmates” on the license plate and how in love they seem while dancing close.

She never wanted to sell the two Journeys’ paintings of the Young Lovers to the same person.

“In my mind, young lovers don’t stay together, but the buyer insisted, so I did,” she said.

On the walls are the paintings and other mediums and on the floor, are shiny trunks she bought to display pieces that look like they’re exactly where they’re supposed to be.

Then, the medium takes a right turn to the first church pew she carved, originally gray, weathered and falling apart, and transformed into an intricate carving of the Crucifixion on Calvary blasting with color behind it because of a light attached to the back of the pew.

Her story turns left to The Saw Lady, another artful personality of Chinn’s, that fills up her queue with orders she knows will be processed by Christmas for clients.

About four years ago, she saw a plasma torch and said she was going to teach herself how to use it.

“I cut everything I had and ran out of stuff,” she said.

But when a guy had 14 saws for two bucks a piece at a flea market in Fairbury, Chinn hopped and The Saw Lady was born — she carves cowboys and wagons, last names and animals, and it’s all part of her re-purposing craft. The sundial that sits in one of the gallery’s corners uses more scrap metal with a round piece of glass, and even hats aren’t out of the question as her website, cindychinn.com, displays a birdcage topper.

Chinn’s talent for carving seems endless — she also took on graphite in carpenter pencils. Graphite is a fine mineral that cleaves easily, but Chinn knew she wanted to carve it.

“I thought, ‘If I cut that right, it could look like a tunnel. Trains come out of tunnels. I’ll do a train,’” she said.

The miniature carvings earned her a spot in “Creative Extremes,” a German-English coffee table book, and she was one of three pencil carvers in the world at the time.

Call her penchant for detail a blessing or a curse — Chinn purchased a microscope to view the minuscule graphite shavings, and found her time into the pieces doubled.

“I put more detail into it,” she said about the carvings that are as thin as hair. A micro-museum in Spain has taken interest in a few of Chinn’s pieces, and she will soon have pieces for show in Kansas City.

Qatar was interested, too. Chinn received an email about the Scrap Metal show, and at first, she wasn’t sure the email was authentic.

“Other artists were contacting me and asking if it was real,” she said.

Qatar offered to pay for the shipping, airfare, hotel and meals for two weeks.

“Everyone was questioning. Who does that?” Chinn said.

She started getting calls at 3:30 a.m., when she was working.

“I think this is real,” she said she told Whitton. “I took that chance.”

The chance turned into a two-week venture of 30 international artists. Chinn’s art was on display, and she also spent some time doing workshops. She tweeted and posted continuous updates. Her Camel Head sculpture was popular as were The Saw Lady’s Camel’s on a scrap saw metal path.

As a send-off of appreciation, the artists were given a plaque.

She and Whitton made the trek from the hotel to the domes several times a day.

“Most people stayed the whole time,” she said. Whitton counted the steps from the hotel to the show.

Whitton has been shooting since the 1960s and he captured the exhibition in Qatar mostly in candids.

These days, Whitton gravitates toward events.

“I love people and trying to capture the feel of an event,” he said.

His photos in the gallery are meant to draw the local audience with rural scenes, but his interest is vast — nature and landscapes to portraits and shallow depths.

He and Chinn have had some shows together, but he finds himself shooting Chinn’s artwork keeps him busy.

From the looks of it, Chinn is occupied with any medium she can get her hands on. She indicated interest in the Her Flag project, a nationwide venture for Marilyn Artus, who started the project to commemorate what the Suffrage Movement brought: the 19th Amendment.

Who better to make the flags than women, but Chinn was careful to include Erasmus Correll, a Nebraska state senator, and one of Hebron’s fathers. Correll was president of the American Woman’s Suffrage Association and wrote energetic editorials on the topic in his publication, Western Woman’s Journal.

Chinn used digital for the flag that also had Correll’s wife, Lucy, and Willa Cather, along with other authors. She focused on the eyes of her subjects through old photographs.

“We could see into their souls as they look after our future,” she said.

And while Her Flag is now cast forever in local history, Chinn has moved to another medium. She is working on a five-foot painted glass project with 3D effects, that tells yet another story of a great-grandmother who was two years old when she saw President Abraham Lincoln in a parade.

Chinn’s art Journey is a story By Appointment Only, that won’t have ending anytime soon. 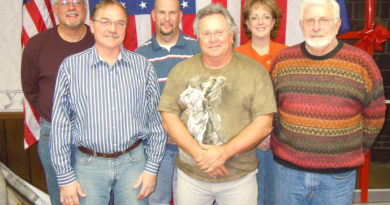 Dittmer’s research to be covered in Byron Saturday