Thayer County Fair Board President for the Ag Society, Bob Dankenbring, gave a sneak peek into this year’s fair to the July 11 coffee crowd, facilitated each week by the Hebron Chamber of Commerce.
The fair board is returning winged sprints to the Thayer County Speedway in Deshler through the United Rebel Sprint Series RaceSaver Sprints. The URSS begins a packed weekend Aug. 2 in Deshler for a $1,000 purse and $200 to start in A Feature.
According to the URSS website, it will be the first sprint car race on the 3/8 mile clay oval track for URSS.
The Hobby Stock Racing event begins at 7 p.m., Aug. 2, followed by the winged sprints. At 6 p.m., drivers will test the track out for Hot Laps.
Dankenbring said the winged sprints should pull drivers in who are scheduled to race in Belleville and want to make some extra points 30 miles north in Deshler.
“They’re anticipating 60 to 100 cars, so hopefully a lot of those same cars will be on our track Thursday,” he said. “Maybe some of their race fans will be there.”
It has been over 10 years since winged sprints were featured at the fair. Lending his experience to schedule the event was board member, Terry Tuma, who is familiar with the racing community, drivers and promoters.
In another announcement, Dankenbring said the trailer races are no more.
“The cleanup was unreal,” he said.
In the Grandstands Aug. 3 will be the MATTPA Truck and Tractor Pull at 7 p.m., and on Aug. 4, the original Peterson Brothers will take the stage in the Grandstands at 7:30 p.m.
The beer garden stage will host Red Line Velocity at 9 p.m., Aug. 3, and Shotgun Rider at 10:30 p.m., Aug. 4.
Wagner’s Carnival is back for four nights, beginning each night at 6 p.m. and ending at 11 p.m. Pre-sell wristbands are available at the banks in Thayer County.
The Ag Society has contracted with the carnival for approximately five years.
“They are out of Texas and go to Beatrice, and that makes us on the way,” Dankenbring said. “It is a large carnival for such a small place. We are lucky to have that.”
Since Thayer County is a stopping point for Wagner’s to make a little money, the fair board works around the carnival’s schedule.
People assume carnivals profit well, but in small communities they don’t, Dankenbring said.
Wagner’s spends about $45,000 in Deshler to break even. The fair board shells out $30,000 for the contract, scheduled a year in advance.
Fair board members and their wives are busy now preparing for opening night Aug. 1.
“You can see people over there almost nightly working, cleaning it up and organizing,” he said.
All around improvements, including LED lights in the beef barn and the 4H project that gave the horse barn a new coat of paint, along with water management near the beef barn, were well needed, Dankenbring said.
“Whenever we schedule the fair, there is a nice big rain for the county,” he said.
Opening night will feature the 6 p.m., parade through downtown Deshler, followed by the Pioneer Farm Family Awards in the Grandstands. The Mutton Busting contest begins at 7 p.m., in the Horse Arena and the 4H Cake Raffle will be at 7:30 p.m., in the Grandstands.
Regarding last year’s tragic accident that resulted in the death of performer, Abby Uecker, Dankenbring said they will have security and have talked with law enforcement. He would not comment as to whether the Ag Society had made any insurance payments in relation to Uecker’s death.
The Thayer County Fair schedule and updates may be found on Facebook and at www.thayercountyfair.com. 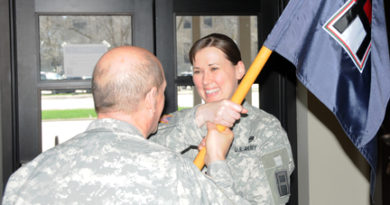