Fayle was taken to BryanLGH West by StarCare Air Ambulance. Hebron and Deshler rescue workers were on the scene of the accident and transported Fayle to Thayer County Health Services. Fayle’s infant son who was strapped into a child safety seat in the back seat was not hurt.

According to a release from the Thayer County Sheriff’s Office, the accident happened a few minutes before 6 a.m., on Nebraska Highway 136 approximately two and one-half miles east of Deshler.

The release indicated that Sandoval, who was pronounced dead at the scene, was westbound when his 2005 KIA Spectra was struck head on by a 2005 Hyundai Elantra driven by Fayle.

Fayle was in surgery most of Friday at BryanLGH West for shattered ankles, broken arms and other injuries to her body. She did not suffer any head trauma.
According to the release, Highway 136 was closed and traffic rerouted for over two hours. Both vehicles were total losses.

The accident is still under investigation. 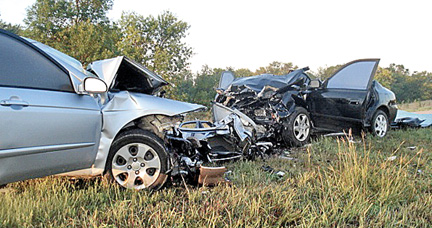 ‘Not Guilty’ Plea and Plea Agreement Held in District Court