Dankemeyer, 59, of Deshler, is being held at the Diagnostic and Evaluation Center in Lincoln, and is charged with 10 felonies, stemming from two incidents in Deshler on June 22 and 27. He was already in jail for the June 22 incident.

During the June 27 incident, a weapons cache and explosives were discovered at Dankemeyer’s 407 1st St., residence, along with time-fuses that are used to set off explosives. The Thayer County Sheriff’s Office, Deshler Volunteer Fire and Rescue Department and Nebraska State Patrol Bomb Squad were on scene for hours. The immediate area was evacuated and a perimeter established.

Shortly after the incident, the sheriff’s office reported the arrest of a female after drugs and drug paraphernalia was found. at the residence. Arrangements were made for the children at the home to stay with relatives.

The Federal Bureau of Investigation held a record on Dankemeyer, who was previously convicted of a felony and sent to prison at least seven separate times, including once in Nebraska’s U.S. District Court for violating his supervised release as a felon in possession of a firearm.

The 10 charges are possession of a firearm by a prohibited person; three counts of using a deadly weapon to commit a felony; possession of a defaced (manufacturer’s identification mark or serial number removed) firearm; three counts of terroristic threats; first degree unlawful possession of explosive materials; and distribution of a controlled substance for approximately 484 grams (about one pound) of methamphetamine.

Court documents state a possible witness received an anonymous phone call, which could not be traced, that he should  “let this matter lie,” in regards to the case. The individual was scared for his safety and the safety of his family.

A warrantless arrest affidavit for detention states Dankemeyer was inside the 4th Street Tavern in Deshler June 22 when he approached a family with threats of harming them. He was told to leave by the manager and refused until he learned law enforcement had been called.

But Danekmeyer returned to the tavern and aimed a handgun at three individuals sitting outside. He left again in an older Ford pickup with California plates, drove to Hebron  and was arrested by a deputy at Shell gas station.

Shortly before driving to Hebron, Dankemeyer visited a Deshler residence, where a deputy retrieved firearms known to belong to Dankemeyer.

His first court appearance is July 13 at 10 a.m. in Thayer County Court. He will not physically be in court — Dankemeyer will be cast via courtroom software. 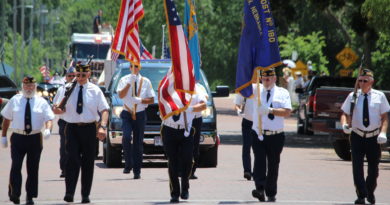