February 14 is a day many commemorate to love and romance. People symbolize their affection to one another with chocolates, flowers and special date nights.

However, not many live to see a Valentine’s Day celebrating a love that has stretched on for eight decades.

On Dec. 23, Arne and Esther Larsen, of Hebron, celebrated their 80th wedding anniversary.

Congressman Adrian Smith applauded the two when he spoke on the floor of the House of Representatives.

“Fifty years of marriage is referred to as the golden anniversary and sixty years as the diamond anniversary; however, there is no such reference to an 80-year anniversary because this accomplishment is so rare and unique,” said Smith.

When people find out about their unusually long marriage “they don’t believe it,” laughed Esther.

The two met at a Luther League Convention at a church in Abdal, northwest of Superior.

Arne, now 103, was from a farm near Ruskin. He had almost finished high school but had to drop out the last semester in order to help his mother after his father passed away.

Esther, now 99, was from Abdal and also grew up on a farm.

Both of their parents were from Denmark.

They dated for two years before tying the knot on Dec. 23, 1934, at a church in Abdal that Esther’s father helped build.

During that time, the nation was facing deep financial troubles. We now refer to that time period as the Great Depression.

“The biggest depression was in 1934 and that was when we got married,” said Arne. “There was no help at all.”

In 1937 they had their first child DeLoyd, then their second, Rogene, four years later.

The family moved to Hebron around 1946 and Arne and Esther have stayed since.

On special occasions such as Valentine’s Day, her birthday and Christmas, Esther recalled her husband always getting her gifts.

“He always gave me something,” said Esther. “Some days he did it just because he wanted to.”

Later in life, the couple would go on trips together to both the east and west coasts.

The couple now has three grandchildren and six great-grandchildren. They have seen countless changes in history that Arne said he “couldn’t even begin to describe.”

However, one big change Arne recalls was when Esther only made $2.50 a week as a nanny for a doctor. The minimum wage now in Nebraska is $8 an hour.

Arne, who worked at two implement businesses and the Hebron Memorial Funeral Home, worked up until he was 100 years old.

Esther worked at Thayer County Health Services for many years as well as at the Hebron high school cafeteria.

The two are now both retired and contentedly live in Hebron 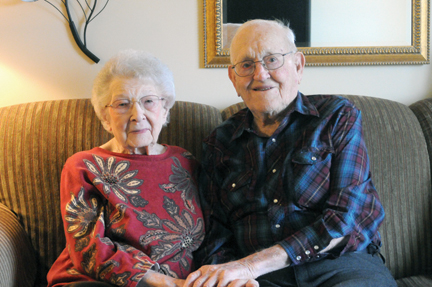