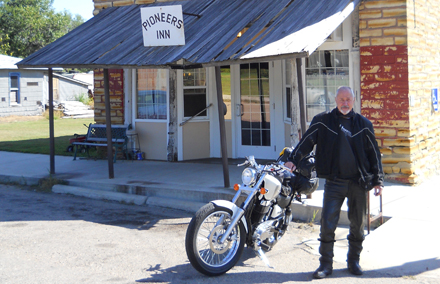 At first it sounded like a helicopter coming in for a landing…thumpa, thumpa, thumpa…but a few seconds after hearing the initial sound, FSSNOC director Jack Robinson pulled his four-stroke-single-cylinder motorcycle into a parking stall on Lincoln Ave., in Hebron.

The six-foot two-inch, white-haired rider clad in black leather and grinning from ear to ear, said he had just ridden up from Hutchinson, Kan., to find a local restaurant where his Four-Stroke Singles National Owners Club could hold a meeting.

FSSNOC (pronounced fizz-knock) is a national group of four-stroke-single-cylinder motorcycle enthusiasts who come together to ride, swap stories, share tips of the trade, and generally, like most involved in a hobby, eat, breathe and sleep their special interest.

Robinson started the club in 1985 from what he says was a “thought that came in the night” and was ecstatic when he signed up his first out-of-state member in 1987. Today, 25 years later, the club of “thumpers” (nicknamed for the sound the bike makes as it rolls down the road) boasts a nationwide membership of over 5,000.

Although members generally keep in touch using online sites, Robinson often organizes face-to-face meetings which include, of course, the ride. The excursions, called ThumperCafe-USA, take riders to rural areas of interest where they take in the sights and visit restaurants with good food. “Any one of us can organize these rides,” he explains, “but the rules are we stick to small towns and find wholesome, congenial restaurants with good food that can accommodate a group of hungry fizz-knockers.”

It’s how he found himself in Gilead earlier this month. “I’d heard from a friend that the Pioneers Inn had good food, so I gave it a try and agreed,” he said, “and I’m happy to say, after meeting with the owner, we are scheduling a ThumperCafe-USA there, Oct. 8.” He also said there might just be a first for the club. “Depending on how many show up, we could possibly eclipse the town’s population,” he said.

Pioneers Inn owner Karen Keilwitz laughs. “It’s true,” she said. “They just might. Our population used to be 36, but I think we’re fewer now.”

Keilwitz, who just happens to be the president of the Thayer County Visitors Committeee, is thrilled to have the club visit. “I’m fixing them our traditional Sunday buffet,” she said, which includes her famous broasted chicken, roast beef and all the fixings. “He (Robinson) even twisted my arm for pies,” she added.

The club will arrive around 10 a.m., Saturday, Oct. 8, line the main street of Gilead with “thumpers,” then leave in the afternoon following lunch and a short meeting. Members are more than happy to visit with anyone who is interested in the motorcycles, Robinson added. “We welcome anyone to come take a look and visit with us,” he said.

For more information about the national club and its “thumpers,” visit Robinson’s website at www.fssnoc.org.