It all began in 1981 when Vicki Talbot came from Australia to Nebraska as a Lions Club exchange student and stayed in the homes of John and Fayrene Levendofsky and Lavon and Fern Bohling in Hebron.

It was a memorable experience that led to an unexpected return for Talbot on May 14, 1985, with a tour group consisting of 14 young adults on a Trek America Camping Tour.
As a photo from the Hebron Journal May 22, 1985, issue showed, this group included nine from Australia, two from Switzerland and two from New Zealand along with their tour leader from Canada.

The team was around the Chicago area on May 13 when a bad storm rolled through and camping became unpleasant.

No one wanted to get hotel rooms so Talbot offered to contact the Bohlings if the driver would forgo the “regimented Trek America escorted tour with strict itineraries and timetables” and drive to Hebron.  Arriving in Hebron in the early morning hours on May 14, the Bohlings welcomed them into their home.

Furniture was pushed aside and 14 sleeping bags were spread out on the basement floor for a few hours of sleep.

“I can’t imagine what you must have thought when a large group of complete strangers turned up on your doorstep at 3:30 in the morning and invade your house,” said John Waghorne, one of the Australians, in an email to the Bohlings years later. “In what was a very regimented Trek America escorted tour with strict itineraries and timetables, it was lovely to throw all that out the window for a couple of days and experience your very genuine hospitality. It was one of the highlights of my nine month trip.”

In later emails by the Australians, they recall being served a “massive hot breakfast” the next morning.With Lavon acting as tour guide, the group went to several historical sites outside of Hebron including the Rock Creek Station, the Oregon Trail wagon ruts, George Winslow’s grave and School on the Oregon Trail.

Pictures also show the group enjoying a meal at the Hebron Legion Club and a backyard barbecue during their stay in Hebron.

Thirty years later, on April 17, 2015, Fern and Lavon’s son, Tim, was contacted by Helen Walker, of Australia, who worked for the Asia Pacific area of the same company as him.

She had one question: Do you know Lavon Bohling?

Walker had only retained contact with one other person, Waghorne, who also emailed and added some details and pictures.

“I will never forget arriving at some very early hour in the morning and there was your mom and dad standing in the doorway as if they had been waiting to meet us all their lives – they were so welcoming and so very kind … I still tell the story 30 years later of the amazing hospitality,” Walker wrote in one email.

The emails expressed “amazing hospitality in Hebron when these Aussies, Swiss, and Kiwis descended on their small town” and it left “a very lasting impression.”

Two from the group, Talbot and Peter Blundell, had also gotten married.

It was truly a nostalgic time for the Bohlings and their previous late night guests. 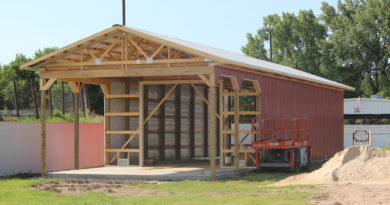