Nebraska democrats should already have March 5 marked on their calendars for the Nebraska caucus as they prepare to select their choice for the presidential nominee.
Thayer County’s caucus begins at 10 a.m., at the Belvidere Community Center. Those interested in choosing a democratic nominee should plan on 9:30 a.m. to register.
Non-registered persons may register to vote at the caucus.
The caucus is the venue in Nebraska for democrats to choose their preferred presidential nominee. The state’s caucus is closed, meaning voters must be registered as democrats in order to formally choose their candidate.
“This is the only time they’ll have a chance to vote in the primary,” Loren Peithman, chair of the Thayer County Democratic Party, said. “They need to be there if they want their vote to count.”
Registered republicans can show up as well and re-register as democrats. Observers are welcome.
“It is an open meeting to all parties,” Peithman said.
The Belvidere caucus will have four corners, with two corners for each of the candidates, Bernie Sanders and Hillary Clinton, a corner for the Independent party and an open corner to nominate anyone.
Each voter will receive a registration card with their name on it to carry with them.
“When you’re done (discussing candidates), you write who you are going to vote for on the card,” Peithman said.
A caucus chairperson and recorder will be elected on site. A letter inviting Nebraska democrats to be part of the election process from both Sanders and Clinton will be read out loud to start the caucus.
Then, voters will be asked if anyone wants to speak on behalf of either candidate. After, voters will gather in their respective corners.
Candidates must receive at least 15 percent of the vote from individual groups at the caucuses in order to be named as a preferred candidate.
The cards will be turned into the Thayer County Clerk Monday morning.
The Nebraska Democratic Party will tally the results it receives via email, Peithman said.
Belvidere is the only precinct for the caucus in Thayer County.
Peithman said there are 793 registered democrats in Thayer County.
“We need them all. If we get 700 in that small building, we will count them (the votes) outside,” Peithman said.
He is trying to drum up support for democrats.
Four years ago, Thayer joined with Jefferson and the caucus was held in Fairbury. Peithman said local democrats eventually decided to hold their own in Thayer.
He encourages democrats to vote in the May 10 primary because the local elections are important.
Originally, nebraskacaucus2016.org had Thayer County’s caucus scheduled at the Hebron Secrest Library. That information has since been corrected.
The website walks visitors through the caucus process with a handbook and frequently asked questions. 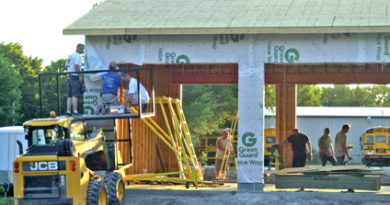