The Thayer County Commissioners met July 24 with an agenda full of many different items to discuss.

Richard Heinrichs, Thayer County Road Superintendent, presented monthly updates to the commissioners. One of the issues brought up was pivots spraying the roadways.

Although this has been an issue every year, further action may be taken in the future to try and resolve the problem.

In other business, the group moved to accept the resignation of county treasurer Eileen Asche. Twenty-seven years after running for office, Asche is leaving the position.

In other business, commissioners moved to accept the trade-in of a vehicle from Deshler Motors.

Commissioners also discussed a proposal to close a road that had previously been denied. A decision was made to not look into the issue again.

Bill McPherson, Thayer County Emergency Management director, spoke with commissioners about a program which assesses the needs of an area after a disaster. As of this time, McPherson has decided not to pursue the program.

Stacey McLaughlin, Clerk of the  District Court, spoke with commissioners about continuing an agreement to provide reimbursement to the county for child support related work done by the District Court office. The agreement applies only to  cases that involve the state. The new agreement would be in effect from October 1, 2013, until December 31, 2014. Commissioners voted to accept the agreement. 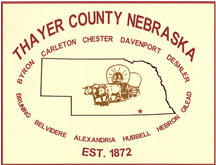