The Hebron City Council said Monday it will revisit the city’s dangerous dog ordinance, following a discussion that included members of the public on what constitutes a dangerous breed of dog.
The ordinance prohibits specific breeds of dogs that have been deemed dangerous — pit bull, bull terrier, Staffordshire bull terrier, American pit bull terrier, American Staffordshire terrier, chow, doberman, rottweiler, wolf and wolf hybrids.
The council included the issue on its agenda for the Dec. 7 meeting because of complaints, City Administrator Chris Fangmeier said.
The meeting was held at the Stastny Community Center as a trial run to see if council meetings could draw more attendance in a larger space. Turns out, there was quite a crowd, which thinned out after the discussion on dogs.
Councilman Kurk Wiedel wanted to know how the city should differentiate between safe and dangerous dogs.
“Where do you draw the line?” he said.
One couple recommended the city ticket owners who do not take precautions for the public’s safety. The couple own a pit bull mix breed and have no worries the dog will harm anyone. They want the city to stop grouping dog owners and their dogs under a dangerous umbrella.
Thayer County Sheriff David Lee said if the city rules certain breeds  vicious, then the sheriff’s office will have no choice but to enforce the law.
“I see both sides of this,” he said. “The simplest of muzzles will keep an animal from biting.”
“What we’ve got here is the sheriff has offered a compromise. If you’re going to have this (dangerous) dog out, have a muzzle,” Mayor Shane Day said.
Several dog owners at the meeting said they weren’t allowed to license their dogs with the city because the dogs were on the dangerous list.
One owner said he had registered his pit bulls with the city for years and couldn’t last year because now, they’re on the list. He had copies of past years when he was allowed to register his pit bulls.
“Responsible dog owners should be OK,” City Attorney Joe Murray told him.
“I think we should focus more on the dog and owner than the breed,” Councilman Larry Fangmeier said.
In other business, several properties were declared nuisances by the city.
Property owner Dennis Phelps, whose trailer house is in the group, said his isn’t the worst property in town. He presented the council with photographs of properties in Hebron.
“I spent two hours driving around town and taking photos,” he said. “If you’re going to do it for one, do it for all.”
Phelps said there seems to be a common thread on the warnings he’s been given because the fire department wants his lots for a parking area.
“If you want the lots for parking, make an offer,” he said.
But Hebron Fire Chief BJ Linton, who was at the meeting, said that Phelps’ claim was simply not true.
Phelps asked the council for a three-month extension to repair the trailer and garage. He said he lives in Wahoo and works full time.
Wiedel asked about the milk tank on Phelps’ property.
“The fence is not fixed,” Wiedel added. “Personally, this does not need an agenda, guys. Declare this property a nuisance. He’s had ample time to take care of this.”
Wiedel said the property has been an issue for five years.
“We’re not giving him three months,” he said.
Phelps will receive a copy of the resolution to declare his property a nuisance and will have 15 days to complete the repairs.
Nothing will happen until the January meeting, Murray said about enforcement.
In another matter, Steve Anderson approached the council about increased parking at the Stastny center.
At large events, parking may overflow to 13th Street’s paved shoulder. In addition, a grassy area has been earmarked for vehicles.
The council also had requests for two liquor licenses – Brand X and C and M Supply will be reviewed
Dec. 17 at 12 p.m. during a special meeting of the council.
Additional items may be on the agenda for the special meeting. 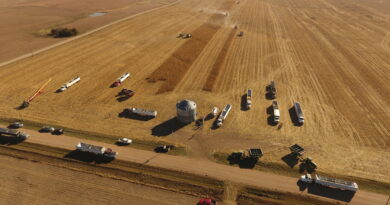 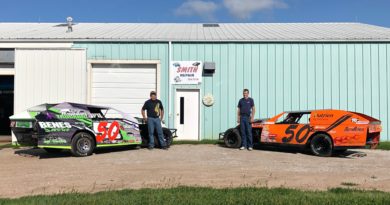