The Accountability for a Quality Education System Today and Tomorrow, or AQuESTT, is new for area educators, but possibly a good sign of what’s to come – leaving states to decide accountability for their schools instead of the federal government.
The No Child Left Behind Act was scratched in Washington for the Every Student Succeeds Act, which still requires the testing of NCLB, but the details of how and when those tests are administered will be left to the states.
The Nebraska Department of Education implemented AQuESTT, which measures beyond test scores and breaks the practices, policies and procedures of schools into six tenets: positive partnerships, relationships and student success; transitions; education opportunities and access; college and career readiness; assessment; and educator effectiveness.
“It’s a learning experience for everyone,” Shickley Superintendent Brice Jorgenson said.
On the AQuESTT scale, all Shickley schools are “great” on a four-point rating of excellent, great, good and needs improvement.
Jorgenson said it is definitely better than the previous ranking system.
“Before, if you were No. 1 in math testing, you had no other place to go except for down because your rating went down. This gives opportunities to grow and ways to move up levels,” he said.
Another area of scoring was completed through evidence-based analysis responses in which school officials answered survey questions.
Out of 90 possible points under the six tenets, Shickley scored 67 at the high school, 66 at the elementary and 77 overall.
Schools were rated on other data as well, including graduation rates
Continued on page 8
and test scores.
Principal Tom Kiburz said Thayer Central students do well on test scores and the district has addressed student safety with its parking barricades, walkway between buildings and its security doors.
“They’re trying to measure what makes an excellent school,” Kiburz said.
If a school excelled in an area, it could be used as an example to other districts, Kiburz said. At the same time if a school needed improvement, the ratings system could point to professional development for the school.
He said NDE Commissioner Matthew Blomstedt sees there is more to measuring a school than simply test scores.
“It’s a better opportunity for self-evaluation and a better process,” he said. “We took a hard look at where we’re at and if we need to change anything, it would seriously need to be looked at.”
Thayer Central received a “great” rating and 63 points at the elementary; 70 for the intermediate; 62 at the high school; and 81 overall.
“It’s good that we had some input,” Bruning Davenport Superintendent Trudy Clark said. “The fact that we were able to answer questions and submit, that gives us a voice.”
The elementary school in Bruning was rated “great” as well as the middle school, high school and the BD district overall. The elementary school in Davenport received a “good” rating.
She said the system was discussed at a conference last spring, but there weren’t concrete answers as to what the process means.
“It will be more valuable if we proceed from this. Right now, all they know is we’re in a great district,” Clark said.
The BD district spends a lot of time under AQuESTT’s transition tenet because students are constantly moving between buildings.
“We do have a decent process in place. Students are aware of what will be expected of them,” Clark said.
Students in the BD district take advantage of the duo credit classes from Southeast Community College, Peru State College and the University of Nebraska-Lincoln. The district also offers a Microsoft Office regiment to prepare students.
Clark was pleased with the district’s initial rating.
“It’s representative of what we do here. We’re looking forward to making improvements,” she said.
Bruning Davenport scored 69 for its district overall; 68 at the middle school; 69 at the high school; and 68 at both elementaries.
Deshler Superintendent Al Meier said the tenets give him a better idea of what NDE would like schools to focus on.
“We really do value education and we value teaching. The main thing is to help kids prepare for life. There is always room for improvement,” Meier said.
Deshler also received a “great” rating and a score of 42 for its high school; 39 at the elementary; and 53 overall.
“We have touched on all six tenets. It’s (the ratings) given us some things to think about,” Meier said.
He likes the approach NDE has taken.
“Nebraska held its ground and now they have come up with a model other states are going to look at,” he said.
Deshler can build from the tenets, Meier said.
“We can take college-career readiness and we can tailor a strategy to meet our kids’ needs,” he said. “We have to do what we feel is best for our kids. That’s where the local control is.”
Over at Meridian, Superintendent Randy Kort said educators are continuously trying to improve.
The student-teacher ratio is one of the district’s strengths.
“A lot of our classes are 15 or 18. Our teachers get to know our students really well and identify areas we can improve on,” Kort said.
They could see improvements needed to be made in math. Subsequently, the district set aside more time for math instruction. Students who slid behind in math scores  during the 2013-2014 school year showed improvement last year.
Kort said the supportive school community contributed to increased enrollment at Meridian.
“It’s beneficial when we have that support,” he said.
The AQuESTT rating system uses increased enrollment data in its process.
Meridian elementary, high school and overall rating was “good,” and its score was 78.
“Anytime you have local control in education, you have the people who are most vested in the system making decisions for the welfare of students. Academics come hand in hand with local control,” Clark said. 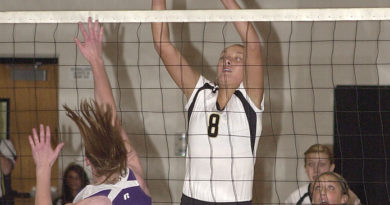