In the midst of town halls to decide how to approach downtown revitalization, City of Deshler officials and citizens were at the city office Nov. 18 to see a revised vision for Deshler.

JEO Consulting is providing engineering and planning guidance after the city received a 75/25 percent matching grant from the Nebraska Department of Economic Development, and the Deshler City Council approved the firm’s proposal.

At the meeting, JEO planner, Jeff Ray introduced the new version of the DTR plan, which included costs for the collective $5,385 million revitalization, following recommendations made in previous meetings.

Ray said the next move might be breaking out the costs into potential phases, such as working on certain areas at a time in the downtown revitalization area that runs from 3rd Street to 5th Street along Bryson Avenue and along 4th Street from Hebron Avenue to Railway with the  major street project in the center.

The idea for the street section  is not to eliminate the bricks on the street, as the bricks are part of Deshler’s history, rather, portions could be removed for easier access to the infrastructure below the surface in the event of repairs, and the bricks would be reused in the new design, explained Ray.

He also commented on the flag pole in the center of downtown.

“The flag pole is a landmark, that’s who you are,” he said, and added the base does needs work.

Concrete for pavement, driveway and sidewalk are part of the street improvement.

The water infrastructure and storm sewer section is estimated to cost 976,000 and the storm sewer pipe is $220,000 of that total.

All renderings, the map of downtown (conceptual layout), with improvements on streets, water and storm sewer and electrical, and estimated price list for the $5.3 million project are available at the city office.

“You have a new set of eyes looking at it and see what it could be,” council member Glenn Bartling said.

“It’s meant to be inspirational,” he said.

Meanwhile, the city is working on another project that could work in tandem with the revitalization project — the Local Option Municipal Economic Development Act, or LB840, that sets aside a portion of city sales tax for economic development projects.

Mayor Julie Deepe said they are just getting started with a new committee.

“I want to get that on the ballot to put it in place,” Deepe said. “We have interest in town. It’s a way to give back and help our retail businesses improve.” 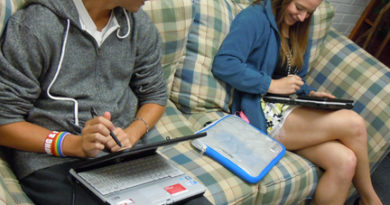 School board reaches agreement with college

Titans, Dragons golf qualify for state meet – both runners up in respective districts