Five designs of the Thayer Central Community Schools district were presented at the School Facilities special meeting Oct. 14 of the Thayer Central Board of Education.
Superintendent Drew Harris estimated about 40 people attended.
“I think it went well,” Harris said about the meeting. “We’re trying to keep the public informed as we move forward.”
The designs were a slide show of five ways the district could renovate and build to address the critical, high and medium needs as identified by the district’s Facilities Committee.
Clarks Enersen Partners out of Lincoln presented the slides, and included the construction specifics of the first phase, which was decided by the committee, school and staff.
The approximately $3.5 million project will dip into the district’s building fund. The district will borrow as much as $2.2 million per a state statute formula that allows school districts to borrow two times what their building funds generate in one year.
Districts can pay the loan back over a period of four years.
“We would want to pay off the borrowed money before phase 2 is started,” Harris said during the meeting.
The district is not going to raise taxes.
“We’ve already set the levy. It will not go up from that,” Harris said.
Features of the first phase will change the Intermediate facility to include eight classrooms (should the primary school be vacated); an office area for reception and the principal; new restrooms and renovation to existing restrooms; tornado safety areas; indoor play area; special education rooms; an updated heating and cooling system; new carpeting; and keyless entry.
Harris was pleased with the tornado safety call by the committee – the district was already thinking about the safety of its students.
“It was one thing we were really hoping to get done,” Harris said.
The facilities committee first met in June of 2014 to consider the future of the primary building and discuss portable classrooms, the high school’s future and overall construction and renovations.
After the nearly $13 million bond election failed in May of 2014, the school community met to brainstorm a new plan.
Committee Member Chad Oswald said there were roughly 60 to 70 people at that meeting. Subsequent meetings saw attendance dwindle, but the thought was to form a sub-committee.
From that first group of 60 to 70, the focus had narrowed to about eight to 10 community members regularly attending meetings.
The committee honed in, and the project became more detailed, Oswald said.
The facilities sub-committee brought a plan of action to the school board in February. Come spring, the committee was examining construction models and decided on the design-build model because of the advantages it offers.
A set, fixed cost before construction and shorter timeline are two features of the design-build model. On the downside, projects require more attention from their owners and the fixed cost may be difficult to set.
The remaining two models the committee mulled were the design-bid-build and construction management.
The first was good for competitive bidding, but bad for budgets because costs could change during project construction.
The construction management model provided for costs projected early on, but had the potential pick up overhead costs later on.
The design-build model places the contractor and architect in one entity hired by the district. The team designates a “guaranteed maximum price,” which is based on a performance criteria developer or PCD.
Clarks Enersen was selected to be the district’s performance criteria developer or PCD after the school board sought proposals, beginning in June with Clarks Enersen selected in the summer.
The firm’s responsibilities fall under four focuses: to develop criteria that will essentially guide the larger process; help the district select a design-build team and oversee construction; and monitor the construction to ensure the developed criteria is met.
Potential design-build teams had until Oct. 16 to submit letters of interest to the district. A special board of education meeting Oct. 19 set aside time for discussion on the letters.
Three contractor/architect teams were selected by the school board for interviews Dec. 10. Board members will take about one hour per team for the interviews, and they will conduct the interviews at a public meeting.
Harris said the meeting could easily go for three hours.
The three teams are Sampson Construction and Wilkins Architecture out of Lincoln; Ayars and Ayars, Lincoln; and JLC Incorporated from York with Omaha firm, The Schemmer Associates.
The five designs presented by the district’s PCD include ideas to align athletic areas, construct a larger commons area and corridor system to connect the building and design a courtyard area surrounded by classrooms. 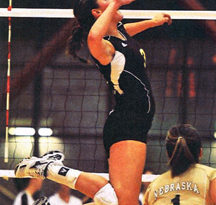