The Hebron City Council’s only action item Monday night during the regular March meeting was approval to hire Midwest Pyrotechnics, LLC, of Stromsburg, to run the fireworks show at the annual Fourth of July celebration. Company owner Ryan Peterson presented copies of various costs to the council stating his fireworks displays run anywhere from $3,000-$8,000 per show.

Hebron Fire Department Chief B.J. Linton said although the department has been in charge of the fireworks display for 25 years, the issue of safety and expense is forcing them to suggest hiring professionals. “Shipping the fireworks alone is costing you nearly $800,” he told the council Monday night. “Also, safety regulations are becoming more stringent and costly.”

Linton said he met with Peterson to discuss the professional display outlining what the department has done for the last several years. Peterson, who has been in business since 2008, told the council he thought his company could put on a better show for less money due to his ability to spread his costs over several shows. “We went from one show in 2008 to 21 shows last year,” he said.

The council voted to contract the pyrotechnic company at a cost of $5,000, or approximately $600 under last year’s event. 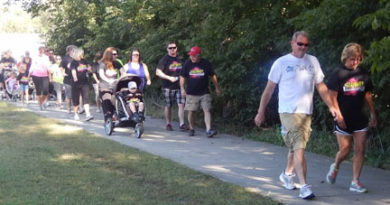