South winds on March 7 were measured by the National Weather Service out of Hastings at 15 to 25 miles per hour, but it was the 40 to 45 m.p.h., gusts that carried flames for area fire departments.

Byron Volunteer Fire Department Chief, Kenny Poppe, said two fires, about five miles apart, burned on the east and west side of Byron that required the Chester, Deshler, Hebron, Superior, Ruskin and Hardy fire departments, along with departments from Kansas.

The call for the fire to the east came in about 1:13 p.m., and Poppe said both fires started roughly at the same time, as the east fire ignited with a spark that came from a pipe cutting tool in a ditch alongside the road.

It burned approximately 450 acres of ground, and damaged pivots and possibly wells.

To the west, a smoldering tree pile lit in January re-ignited and damaged 100 to 150 acres.

Poppe said no pivots or wells were damaged in the west fire.

“We had a lot of help from neighbors and their tractors. We never would have stopped it without them,” Poppe said. Fire fighters were on scene until about 5:30 p.m., checking for hot spots.

The Davenport Volunteer Fire Department was called for mutual aid about a half mile north of the county line toward Shickley for a brush and grass fire about 3:05 p.m., Davenport Fire Chief, Donovan Knigge, said. Carleton and Deshler Fire departments were also called.

Flames spread to a cornfield and scorched two to three acres.

“The biggest thing was the wind, but luckily, trees broke the wind from making the fire spread,” Knigge said.

Davenport pulled their last two trucks into the station at about 7:30 p.m.

“We got it out fairly quick, but old dead trees were burning,” Knigge said.

Knigge said Davenport had 12 fire fighters and five trucks, but it was difficult to reach the fire because of the smoke, trees and hilly terrain.

“Had the wind been out of the north, we could have lost a house,” he said. “No structures were burned in the fire.”

Fire fighters aren’t sure how the fire started. 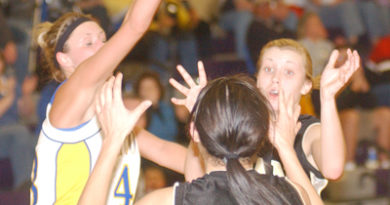