A field fire Sunday, thought to have ignited by downed power lines, threatened three Hebron homes and outbuildings as it ate through half of a section of grass, trees and other dry foliage before fire fighters could douse the flames. The blaze is alleged to have started after electrical wires came loose when an isolator on a pole broke. The two lines arced causing sparks that turned to flames in a field located at Road P and Road 6600 (First St.) in Hebron. Fueled by 40 m.p.h. winds and dry grass and bushes, the blaze raced toward the homes of Kelly Elting, Dick Walsh and John Musgrave.

Linton said the Hebron department was dispatched around 11:30 a.m. and had the fire out by 5 p.m. Disks were brought in by area farmers, Neal Wiedel, Scott Elting and Alan Wiedel, to form barriers around the  homes and to prevent the fire from jumping across Dove Road as it moved toward the Hebron dam. The Thayer County Road Department also helped by burying a stack of railroad ties and wood chips to prevent them from catching on fire.  Williams Drilling of Belvidere was also on the scene providing water. Linton said no structures were damaged although a small amount of damage could be seen on the lower legs of a radio tower that sits in the field. 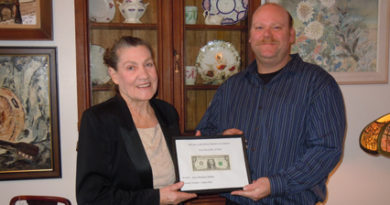