The Hebron Chamber of Commerce has hired a new director to take over for Tina Reed who vacated the position.

Introducing Jami Knerl, of Deshler, who started in the position last week.

Knerl has lived in Deshler for the last nine years with her husband, who is an electrical technician at Reinke, as well as their two sons.

Knerl will be working as the Chamber director part-time as well as a mental health technician at a new mental health unit being built in Geneva.

She will be working 10-15 hours a week at the Chamber office.

“My hours will always be posted on the window,” said Knerl.

As Chamber director, Knerl will be finding ways to promote the town and businesses of Hebron.

The Deshler resident earned her LPN in 2013 and graduated in December 2014 with an associates of science degree with an emphasis in nursing.

When she is not working, Knerl enjoys participating in thousand yard buffalo rifle matches.

Knerl is currently working to get the Fourth of July parade going for the city. Those interested in being part of the parade can get forms from her at the Chamber office.

The Chamber is still seeking out a candidate to fill the role as president of the Chamber as Matt Myers, Price Funeral Home director, is leaving Hebron to take a position in Grand Island. 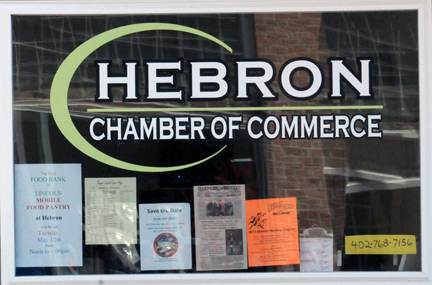