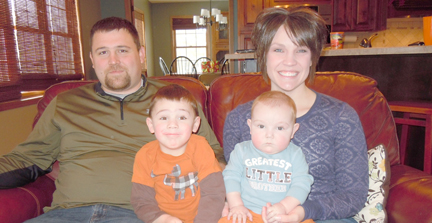 Alex Vorderstrasse, who will be ten months old at the end of this month, was born with hypoplastic left heart syndrome. The young boy, who is currently learning to pull himself up as he gets ready to take his first steps, has already made quite a heartfelt journey in his short lifetime.

Born April 28, 2011, Alex underwent his first open heart surgery when he was just four days old, his second when he was five months. He’s got one to go, but it won’t happen until he’s two or three years old.

Alex’s parents, Spencer and Ranae Vorderstrasse of Hebron, were made aware of his condition in the second trimester of Ranae’s pregnancy. “Surgery was necessary,” Ranae explains, “to make the right side of the heart do what the left side is supposed to do.”

The Vorderstrasses say they received lots of caring and informative comfort from other parents going through the same experience and would like to do the same for others. “Anyone can talk to us about this,” Ranae says. “We’re more than happy to share what we’ve learned and what to expect.”

Take a look at the Vorderstrasse’s incredible journey of the heart as we celebrate American Heart month.

Hypoplastic left heart syndrome: That’s a pretty scary medical term in itself, let alone when it’s associated with a baby that hasn’t even been born yet. It’s also a scary medical term even if you’re a registered nurse who knows what it means, let alone an expectant mother hearing it for the first time.

And, it’s a term that’s rarely used given the condition or syndrome itself is quite rare, so when medical physicians tell expectant parents their newborn has it, lots and lots of questions arise…even if you are a nurse.

Spencer and Ranae Vorderstrasse of Hebron found out in her first ultra-sound that their baby’s heart was not developing properly. “I was 26 weeks along and after the ultra sound our doctor told us the baby had hypoplastic left heart syndrome,” Ranae, who is a registered nurse at Thayer County Health Services, explains. “The left side of his heart was smaller than the right and he was missing a valve.”

Spencer and Ranae were immediately sent to Lincoln obstetrician and gynecologist Dr. Sean P. Kenney who specializes in maternal-fetal medicine, to monitor the rest of her pregnancy. They also met pediatric cardiologist Dr. Ameeta B. Martin who would do the follow-up after surgery. Dr. James Hammel performed the surgeries.

“Alex was born April 28,” Ranae said, “and went in for surgery on May 2. We had his baptism at St. E’s before he went to Children’s Hospital  for the surgery.” Pastor Keith Brozek of Grace Lutheran Church in Hebron made a special trip to St. Elizabeth’s hospital to perform the ceremony, she added.

According to the U.S. National Library of Medicine, the first surgery, called the Norwood operation, occurs within the baby’s first few days of life and generally consists of building a new aorta. “Alex had a partial Norwood,” Ranae explains. “Instead of building a new aorta, a band was placed around the pulmonary artery to make it a little smaller and then they were able to make the aorta bigger. Alex’s aorta was bigger than most aortas in hypoplastic left heart syndrome, so he was able to use his aorta without having to put the pulmonary artery and aorta together.”
Ranae said the pulmonary artery is banded to make more blood go to the body and less blood to the lungs. “Alex also had to have his tricuspid valve repaired, too” she said.

Afterwards, the baby usually goes home, takes daily medicines for circulation and is closely followed by a pediatric cardiologist who determines when the second stage of surgery should be done. “We were told we would be at the hospital for four to six weeks following the Norwood surgery,” Ranae said, “but we were allowed to go home after only ten days. Alex recovered really well.”

Ranae adds that they were in ICU for four days and moved to the fifth floor on May 6. “That’s the good floor,” she laughs. “It means you get to go home soon.” She added that their anesthesiologist for the surgery was Dr. Kim Hissong, a local Hebron friend, and found the familiarity comforting during an emotionally trying time.

At home, Spencer and Ranae monitored Alex’s oxygen, weight, medications and food intake in a special book and went for checkups every week for four months while they prepared for the second surgery.

According to the U.S. National Library of Medicine, stage II of the operation is called the Glenn shunt or hemi-Fontan procedure. This procedure connects the major vein carrying blue blood from the top half of the body directly to blood vessels to the lungs to get oxygen. The surgery is usually done when the child is four to six months of age.

“Alex did really well again,” Ranae said. “We were supposed to be in the hospital for up to two weeks, but came home after eight days.”
Ranae said they were able to take him off of the medications that made his heart pump right after the surgery, and although his blood pressure was a little high when he went home, the medication for that and a diuretic were removed after a week.

Today Alex is a healthy nearly ten-month old boy who is growing and developing right on schedule. He crawls, pulls himself up, and plays with his three-year-old brother Cole.

Certain precautions are taken, however, as Alex gets ready for his third surgery. “No daycare,” Ranae said and added that respiratory infections are especially dangerous at this stage. Spencer, an agriculture engineer for Global Industries, works from home and is therefore able to stay with Alex during the days Ranae works.

Ranae said the third surgery will take place when Alex is two to three years old. The final step, called the Fontan procedure, will connect the rest of the veins that carry blue blood from the body directly to the blood vessels to the lungs. The right ventricle will then serve only as the pumping chamber for the body (no longer the lungs and the body).

She added that some patients may need more surgeries in their 20s or 30s if they develop hard to control arrhythmias from the Fontan procedure, but that most patients tend to lead a normal life. Certain precautions will always need to be taken, such as no contact sports, but for the most part, Alex should be able to live a healthy, normal life.

Ranae said she received caring and informative comfort from other parents going through the same experience; some she met in the hospital, others through online services. So much so, she offers her own comfort to those in need. “Anyone can talk to us about this,” she says and smiles. “We’re more than happy to share what we’ve learned and what to expect.”

And after talking to them, anyone can see the couple has no trouble embracing matters of the heart…even when it comes to the scary ones.