Thayer County Zoning and Planning will hold a meeting April 3 at 7:30 p.m., to decide on a recommendation for Trey Duensing, who wants to construct a Class IV intensive feeding operation near Byron.
“We are operating our own small feedlot and trying to expand to 5 to 10,000 head. There is no minimum,” Duensing told the commission at its meeting March 23.
Dean Settje of Settje Agri-Services and Engineering, Inc., based out of Raymond, said gaining approval at the county level was the first step of several to make the intensive feedlot a reality. The second portion of the project would involve Settje applying for state and federal permits.
Commission chairman, Gary Miller, said the commission is exploring the particulars of Duensing’s request, whether it be 100 percent of area landowners agreeing to the feedlot or documentation of the extra management required to reduce odor and dust.
From the date of the meeting, the commission has 30 days to submit its recommendation to the Thayer County Commissioners. Miller said the commissioners meet the week of April 3 and they also will have 30 days.
Attendance was high at the commission’s meeting as Settje took neighbors and producers through the project’s steps.
Settje said there are two options in which to design the feedlot — aerobic or the more traditional system, anaerobic. The two options address waste management. Simply put, aerobic deals in composting manure  and anaerobic, stockpiling. In the aerobic system, the runoff detention must be pumped and water isn’t stored long.
Producers spoke in favor of Duensing’s request for the intensive feedlot and Settje noted in his presentation that feedlots in general do not have a negative impact on surrounding properties.
Settje said areas with feedlots tend to have a positive effect on neighboring properties and communities and economically benefit from feedlots four to seven times more than areas without cattle.
Using Custer County as an example, Settje said the total impact for livestock topped every other profession in the county, including food service.
Kathy Marquart, who lives a mile north of the impending feedlot said she is concerned with road traffic and health.
“Our family has asthma and we use nebulizer treatments,” she said. “I have strong concerns. I would like my grandchildren to play outside without smelling cow manure.”
One of those in attendance said he also has asthma, however, he has never had a problem.
“I am entirely in favor of this facility,” he said. “As a county, we need economic development.”
“This is a young gentleman willing to jump through every hoop and then some,” Producer Gregg Wiedel said. “I think our county board should vote for this. Yes, there is some odor, but by the time he is going to be done, it will be a model feedlot. If not for livestock in Custer County, it probably wouldn’t be a thriving community.”
Additional discussion revealed neighbors would most likely be impacted by odor three to four weeks out of the year.
Flies are another concern and increased management can help alleviate the problem. Additional bait, the maintaining of pens, aerial spraying and grass and weed control are all designed to reduce the habitat for flies.
In other business, the commission approved a wind measurement tower to allow Aksamit Energy Development to continue its monitoring wind.
Rick Nelson, the director of construction for Aksamit, said a Federal Aviation permit has been granted and the tower will sit 1,000 feet back from the road near Alexandria.
The tower will be marked orange and white with eight plastic and orange balls 20 feet from the guide wires. No additional structures are planned in the area.
The tower will not be lit because it will stay under the 200-foot requirement at 199 feet.
Nelson told the commission Aksamit’s measuring window is at least one year and the towers easily come down when needed.
“It doesn’t require cranes or equipment,” he said. 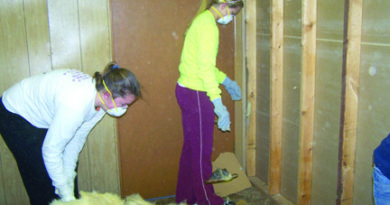