Schmidt, who took the stand the second day of the trial, had pled not guilty to all four counts.

The Deshler man was charged with sexually assaulting his daughter on three separate occasions between the dates of May 1, 2011, and October 31, 2011: twice in his home and once in a camper.

His daughter was about 11 years old around the time of the assaults.

Her mother was a previous partner of Schmidt and had two other children with him.

Schmidt and the victim’s mother had an agreed visitation schedule for their three children. It was during these visits the assaults occurred.

The visits were described as “chaotic” with “lots of drinking and fighting.”
Schmidt was living with his girlfriend at the time.

The victim revealed to her mother in September 2013 who called the Thayer County Sheriff’s Office. Schmidt was later arrested and held in the county jail.

The defense argued that although Schmidt was “not a saint,” a heavy drinker, a poor partner and father, he would never resort to such crimes.

The defense also argued that the timing of the events seemed to be hazy and even changed when evidence pointed that the events could not have occurred the year it was originally thought to have in 2012 – Schmidt only owned a camper for three weeks in 2011.

The prosecution brought in a clinical psychologist who deals primarily with sexual assault cases and discussed why children tend to keep quiet on sexual abuse.

In 2012, Schmidt was accused of assaulting a different daughter but the case was dismissed in January 2013. 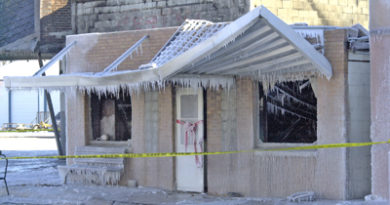 Base Hit Bar destroyed in blaze