“This is not the stuff of happy dreams,” warned Sister Margaret Nacke looking somberly at the crowd in the Hebron Majestic Theater.

And indeed it is not.

Sister Nacke, of Belleville, Kan., has traveled the world included Eastern Europe, the Philippines, India and Latin America to educate people on the evils of human trafficking.

“Human trafficking is a new word for slavery,” said Nacke. “Thanks to technology, a person can buy or sell other people.”

According to the Polaris Project, trafficking is the practice of luring then trapping people into forced labor and sex trafficking by manipulating and exploiting their vulnerabilities.

Today there are thought to be between 27-30 million slaves in the world, though it is hard to get accurate numbers because the business is so underground. It is the second largest criminal business in the world, second only to the selling of illegal drugs.

Though many men and boys are trafficked as well, over 85 percent of those trafficked are women and girls. The average age of victims targeted by predators is 12 to 13, according to Nacke.

Trafficking is in fact not an issue that just occurs in a far away land: it is much closer to home. Sister Nacke mentioned three cases of trafficking that occurred in Belleville, only a few miles south of the county line.

People can identify those being trafficked by looking out for sign such as lack of proper documentation, well rehearsed stories and being controlled.

“There are about 750,000 predators online,” said Nacke. “The internet is the 21st century auction block … It’s the dark underbelly of globalization.”

Popular website such as Craigslist can even be venues for those looking to buy, according to Nacke.

Some of the most popular times to buy are during large sporting events.

Nacke’s interest in human trafficking started about seven years ago when she started researching the subject. As she grew more knowledgeable, people began to ask her to speak on the subject.

Eventually, she founded the Bakhita Initiative, an organization with goals to create a specific nationwide network of Catholic Sisters working to end human trafficking. The name Bakhita comes from a Sudanese nun who at age seven was kidnapped into slavery.

Nacke encourages ordinary citizens to be aware and educate themselves on this issue.

She referred back to a time in her life when she witnessed a situation prior to her knowledge on trafficking. She now views that incident with suspicion and wishes she had the education back then to realize what was going on.

Armed with this information, she hopes to continue the fight, one life at a time. 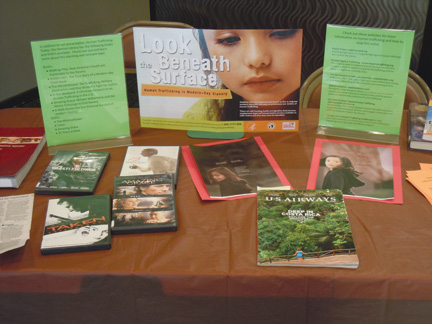