The Korff Fitness and Wellness Center dedication Sunday will play a critical role in comprehensive health care as Thayer County Health Services moves forward, Chief Executive Officer David Burd said at a dedication for the center Sunday.
Burd was the first to speak and while new to the position, he has seen a level of support for the hospital above other comunities in Nebraska. Prior to coming back to Hebron, Burd worked with the Nebraska Hospital Association for approximately 12 years.
“We are fortunate here. Not every town has that level of support. There are truly a lot of folks who have dedicated a lot of time and effort — the county commissioners, hospital board, foundation, hospital guild and many others,” Burd said. He also praised the hospital’s medical and support team.
The outstanding support comes at a time when health care faces perhaps its greatest challenge in recent years.
“Many rural hospitals are struggling as Medicare and Medicaid and insurance companies reduce what they’ll pay for health care services,” Burd noted.
Rural hospitals may now be even more dependent on contributions than ever, such as the $6.9 million gift from Glenn Korff that brought the wellness center to reality.
Gratitude resonated throughout the dedication program with hospital board president, Loren Wiedel, taking the audience back to Glenn Korff’s father Paul and several others who were instrumental in starting the hospital in 1946.
“Then, in the 1960’s, Paul and other community members initiated the bond project that became the hospital,” Wiedel continued. “Over the years, we have continued to partner with the hospital through three renovations and a fourth one starting. We cannot say enough, thank you. We truly appreciate it.”
Glenn Korff’s brother, Ken, was also in attendance for the ceremony.
“I think it’s a wonderful, a wonderful contribution, for future generations. I wish them all Godspeed for their health,” he said after ceremony.
The Foundation for TCHS also played an important role and president Steve Anderson said Hebron was lucky to have such a facility.
“It’s second to none. For a small town to have the equipment, facility and staff — we’re very lucky. We need everyone to come out here and use it, or at least come and have a look,” Anderson said.
A ribbon cutting ceremony was held in front of the wellness center, which is on the north end of the hospital and faces 1st Street.
Thayer County Commissioner David Bruning presented Burd with a key to close the ceremony. Afterward, those in attendance were invited to tour the 17,000-square foot exercise facility that offers cardio workouts, free weights, machine weights, kiosk for 200 exercise programs and aquatic therapy walking pool with a current.
The center will soon be available 24 hours per day with a signed waiver and a security key. 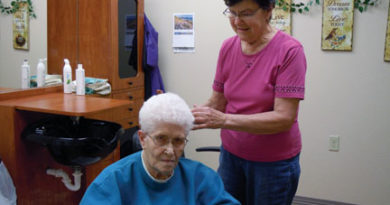 Fencing Most Effective Method of Keeping Rabbits Away from Gardens