Allison Tietjen thought she was finished with pageants after competing for the Miss Nebraska title twice and winning titles as Miss Heartland and Miss Kool-Aid, but she decided to try again and started the road over by winning first runner-up in the Miss Omaha contest last October.
“If I would have won, I would have had a ticket to Miss Nebraska. I had to go on and compete for Miss Heartland,” she said.
Tietjen won the Miss Heartland title and she will make an appearance at this year’s Nebraska State Fair.
She has big plans for the Miss Nebraska title — Tietjen would like to be the second Miss Nebraska to visit all 93 counties across the state and spread a message close to her heart — “We live in the greatest country because of the people who served our country.”
Tietjen is known for an aggressive campaign in schools to raise funds for the Patriotic Productions Veterans Honor Flights to Washington D.C.
She was asked about her platform, “United We Stand, Remembering our Veteran Heroes” by judges during an interview.
She spent her senior year at Thayer Central as the student coordinator for the Korean Honor Flight.
“My goal was $500 to send one veteran to Washington, but the fundraiser took off and we raised over $4,000,” Tietjen explained. She was also able to be on the flight as a guardian.
“My plan was if I won Miss Nebraska in 2015, my goal was to travel to other schools and start them on a fundraiser to expand what Thayer Central started,” she said.
Last year, when Tietjen wasn’t competing, she emailed over 500 schools in Nebraska to ask about the fundraising project.
Eight to 10 schools, including Thayer Central, raised over $15,000. Alone, Thayer Central has raised over $13,000 for veterans.
“It was really neat. I was a guardian last year on the Vietnam Honor Flight,” she said.
She has begun fundraising for the last scheduled Vietnam Honor Flight May 1.
“They are saying it will be the last,” Tietjen said.
Tietjen is excited to compete again and said the talent portion is her favorite part of the five areas of competition — interview, talent, evening gown, swimsuit (lifestyle and fitness) and onstage question.
“I play the piano and it is something I truly enjoy,” she said. “I play Phantom of the Opera,” she said of the piece she will probably choose for the competition. For Miss Heartland, Tietjen won the overall talent portion.
The Miss Nebraska competition is in North Platte and Tietjen said she will be there all week. That Friday, she will be interviewed. On Saturday, the top eight contestants will be announced.
From there, the judges choose five contestants and Tietjen will find out how she fared.
In her first year of competition for Miss Nebraska, Tietjen was in the top five and secured third runner-up. In 2015, she was first runner-up.
She is the daughter of Cary and Amy Tietjen and a junior at the University of Nebraska-Lincoln in family science and nutrition. 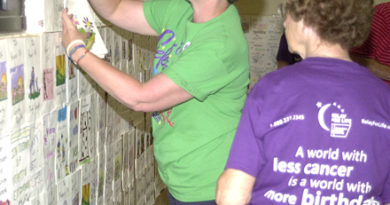