The Lt. Gov. opened talks quoting Mainstreet.com’s top billing for Nebraska in the online service’s rating of “happiness.” He said the state was tied for third lowest with its five percent unemployment rate, experienced one in 15,000 foreclosures and was fifth in personal income to debt. “What does this mean,” he asked. “It means Nebraskans don’t spend money they don’t have, which is the way we run the state. We didn’t spend ourselves into a deficit like others did.”

Because of this, he explained, financial institutions, bio-fuels companies, and technological companies are looking at Nebraska. “But we know agriculture is number one,” he said. “If agriculture stays strong, Nebraska stays strong.”

Lt. Gov. Sheehy said the state will experience another tight budget year because the economy is still a little soft. “That’s why constitutional employees and state employees have been asked to take a pay freeze,” he said.

But Nebraska’s economy is definitely moving forward he explained adding that CNN Money rated all the counties in the nation as good places to live. “In Nebraska, three counties, Sarpy, Madison and Platte, made the top-ten list,” he said. “Any state would be happy to have just one, and here we have three.”

Lt. Gov. Sheehy also said the state uses Nebraska Advantage, a program offering incentives to businesses, to attract them to the state. “We wish we didn’t have to have incentives,” he said, “but we’re competing globally.”

While both he and Gov. Heineman are currently on the “campaign trail,” Lt. Gov. Sheehy said when they first took office, both decided to travel Nebraska to talk to people throughout the state. “It just seemed like a better solution to meeting with Nebraskans where we could discuss issues in their own communities,” he said.

In Nebraska, the Lt. Gov. presides over the Legislature, is chairman of the Nebraska Information Technology Commission, director of Homeland Security, is the business recruitment liaison for the Department of Economic Development, and serves as chairman of Partners in Prevention. 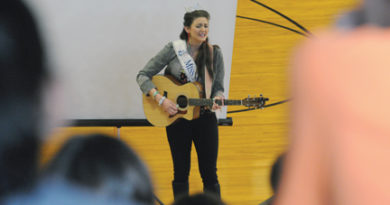