This year, Hebron is switching it up for its Memorial Day celebration.

“It’s going to be very patriotic all the way through,” said Lyle Bucholzer, event organizer.

The event will begin at 10 a.m. at the Thayer County Courthouse.

• President Lincoln, played by nationally travelled reenactor Fred Priebe, will arrive in front of the courthouse by carriage. He will be greeted by General Grant, played by Doug Rung, a local reenactor and head of the historical society in Geneva.

• Next, five drummer boys and the union color guard will march from the Thayer County Bank to the courthouse followed by the American Legion Post 180, the Sons of the American Legion and the Legion Riders. After the parade, participants will post the colors and hold the opening prayer.

• The high school singing group, the Rhythmaires, will then sing the national anthem.

• Lonny Jacobitz, commander of the Thayer County Gold Star Veterans of Foreign War Post 5328, will welcome everyone then introduce the “POW Hymn,” a hymn written by Colonel Quincy Collins USAF. Collins wrote the hymn during his seven and a half years as a Vietnam POW as a prayer for strength and reaffirmation of loyalty to his country.

• Bucholzer will then speak on Nebraska’s involvement in the Civil War as well as Joseph R. Prentice, a Civil War medal of honor recipient buried in Hebron.

• Bucholzer will introduce General Grant. Grant will speak on the battle of Fort Donnelson and the Battle of Shiloh that Nebraska troops were involved in.

•  The community choir will sing Battle Hymn of the Republic. The audience is welcome to join in.

• Everyone will sing “God Bless America” followed by the 21 Gun Salute honoring those who have died in battle. General Grant will give a thank you speech.

• The event will then move to the Rose Hill Cemetery on First Street     where there will be the laying of the wreath for the unknown soldier.  Lincoln will give the Gettysburg address, followed by Grant who will read a letter written by a soldier during the Battle of Manassas.

• The days events will wrap up with a closing prayer at the cemetery.

• At some point during the events, World War II P51 Fighter Barbara Jean will be flown over Hebron. 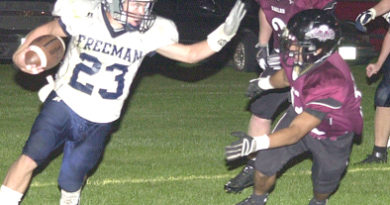