Mike “Mick” Onnen is looking forward to the next chapter in his life.
After serving the Little Blue Natural Resources District in Davenport for 42 years, Onnen was going through notes and making assignments on his last day Jan. 11 before retirement.
“We have way more to do today than I’m ever going to get done,” he said.
No one was hired yet to replace Onnen, who joined the NRD while it was still young.
Started in 1972, the NRD was a result of responsibilities set by the Nebraska Legislature in the areas of flood control, soil erosion and groundwater management and nine other tasks.
Fresh in the door, Onnen worked on groundwater projects, including diverting water to the Little Blue River and establishing a surface water irrigation. He would eventually plan for the Big Sandy Creek Watershed, Bruning Dam, a dam near Clay Center and public use areas.
But first, he planted trees, and oversaw wildlife habitat programs and maintenance for existing dams.
After 42 years, Onnen sees the fruits of his toiling — over two million trees planted and public recreation areas, like Lone Star near Ohiowa and 420 rural customers served by the blue water tower that was built in 1975 near Fairbury with 250 miles of buried water lines. Three booster systems keep the water pressurized.
Then there is the water tower in Gilead that added 145 customers.
“We didn’t have much water in Gilead. The wells weren’t good and the water quality was poor with high iron and sulfur,” Onnen, who grew up between Hebron and Fairbury and went to school in Gilead, said.
His dad was a conservation farmer and Onnen, a 4-H kid.
“I was a wildlife nut,” Onnen said. Bird-watching was also a pastime.
Added to his key achievements are the Liberty Cove and Prairie Lake recreation areas, and 130 private damns for livestock water.
“We’ve had a number of other projects we’ve sponsored,” Onnen said.
Trail projects in Hebron, Deshler and Fairbury have also benefitted, along with a drainage activity in towns like Hubbell.
Projects like Hebron’s Archery Park and playground equipment in Bruning is a way to give back some of the tax money, Onnen said.
All the while, regulations were ever-changing and the presence of nitrates in the water rose.
“We completed the regulations recently again,” Onnen said.
Groundwater management is one of his challenges because while farmers need fertilizer for crop production, overuse isn’t good, either.
Mostly farmers sit on the NRD board and they know some decisions won’t be popular, and they welcome conversation from those concerned about overreach.
More and more, Onnen said the NRD is working with communities.
“They are the losers in this. They pay the price for treatment and the replacement of wells,” he said. “It is a regional problem and impacts more than farmers.”
A retirement party was held for Onnen last week. Fellow managers and employees, plus a crowd of local neighbors and friends attended. Onnen also served the Davenport Community Foundation that moved through three phases of improvements in recent years for new playground equipment, medical clinic and fitness center. Onnen and his wife, Mila, are members of St. Peter’s Lutheran Church.
The Lutheran faith will be part of Onnen’s next chapter as he continues his work with Lutheran Hour Ministeries. Onnen has been with the organization for almost as long as he’s worked at the NRD. He was president of the international organization in 2008 and 2012.
Mission work is on his agenda as well as woodworking to do some remodeling with his children. 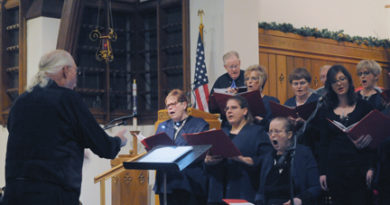