Local law enforcement arrested a Belvidere woman for possession of methamphetamine May 25, after the Nebraska Department of Probation conducted a search of her residence in Belvidere.

Diana L. Sydow, 52, who is currently on probation for a drug related conviction, was charged Monday with possession of a controlled substance, specifically methamphetamine; a class 4 felony. According to the arrest affidavit on file at the Thayer County Courthouse, probation officers conducting the search allegedly discovered approximately one-eighth of an ounce of the drug in her room at her mother’s home in Belvidere.

Sydow earlier in February this year appeared in district court on a probation revocation where she was sentenced to an additional 24 months of intensive supervised probation.

Initially, the Belvidere woman was sentenced to 24 months of probation for attempted distribution of a controlled substance March 3, 2011. According to court records, she was arrested Oct. 6, 2008, at her home in Belvidere after allegedly selling drugs to an undercover detective. She was initially charged with distribution of a controlled substance and intent to deliver an exceptionally hazardous drug, methamphetamine.

In January 2011, Sydow pleaded guilty to the amended charge of attempted distribution and received the 24-month probation sentence.

A year later, and after failing to follow the guidelines of her probation, Sydow was given the additional 24 months of probation in February 2012. Her sentence was to run until March 1, 2014.

The May 25 arrest violates her current probation agreement and she is scheduled in district court for a revocation this Friday at 10:15 a.m.

Monday, June 25, Sydow appeared in Thayer County court on the drug charge and her case was continued to Sept. 24.
She also received a bond reduction from $100,000/10 percent to a $25,000 personal recognizance bond and is currently not in jail. 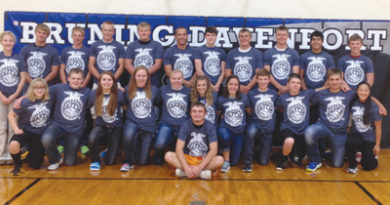