Some may have the run of their lives in late October.
The Oregon Trail Run of Nebraska is set for Oct. 22 with a full and half marathon challenge along the picturesque Oregon Trail, Mormon Trail and Pony Express route.
“The fall colors should make it one of the prettiest runs in the state,” co-organizer, Jeff Friesen said.
The full marathon begins at Roehr’s Equipment on Highway 81 and Road Q at 8 a.m., or Monument Road as it is known.
Just across from Roehr’s sits the Oregon Trail historical marker, which details its dedication in 1915.
Full marathon runners will then head east for eight miles and turn north for one mile before running three more miles to Highway 53.
The run turns south for almost a mile, then connects with River Road.
That’s where the half marathon begins at about 10 a.m., and all runners head west back to Hebron.
“Coming from a runner’s perspective, it is awesome. People who haven’t run before may be motivated. You can watch and cheer people on,” Friesen said. “Having people cheer you on is the most awesome race.”
The run will be sponsored by the City of Hebron.
Friesen is part of a group that chose Thayer County Running Company for its name. The company is organized under Roadrunner Clubs of America.
Friesen is joined by Amber Luebben, Trudy Degenhardt, Ann Hubl, Mike Varner, Shannon LeFave and Bill and Cyndy McPherson.
Hubl is an accomplished marathon runner, Varner oversees Deshler Days running events and LeFave is the cross country and track coach for Deshler Public Schools.
Friesen himself has run four half marathons. Completing a full marathon is still his goal. He began running after his brother ran the New York marathon. Friesen and Bob Krakow, who is always a source of encouragement, Friesen said, trained together for the 2010 half marathon in the Sandhills.
“I’ve done most of my running on River Road,” Friesen said.
In addition to the fall foliage, another plus to holding the run in late October is the cross country season will be over.
A one-mile fun run will be worked into the event, Friesen said.
The action starts the evening before with a spaghetti feed at the Stastny Community Center from 4 to 7 p.m.
“We’re trying to make it a unique experience,” Friesen said.
Runners may pick up their packets at the feed or in Hebron’s Roosevelt Park the morning of the race from 6:30 to 9 a.m.
A registration form is on page 9 in this issue of the Hebron Journal-Register or registrants can visit http://www.active.com/hebron-ne/running/trail-run-races/oregon-trail-run-of-nebraska-2016.
In their packets, runners will receive a T-shirt, bib and coupons. Businesses are welcome to help fill the packets, or sponsor water stations.
Volunteers will also be welcome to hand out water along the run and monitor roads.
Friesen really wants to play up the Oregon Trail theme.
“We would love to have covered wagons as water stations or the Pony Express riders lead us off,” he said.
There are plans to entertain the runners along the route. 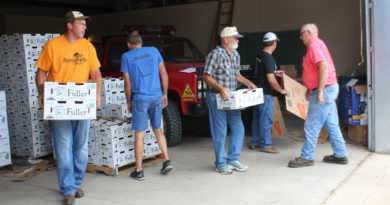 Peach of a donation 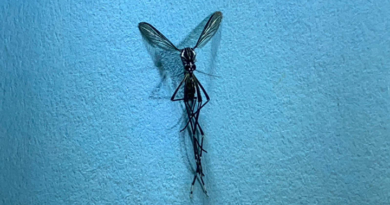